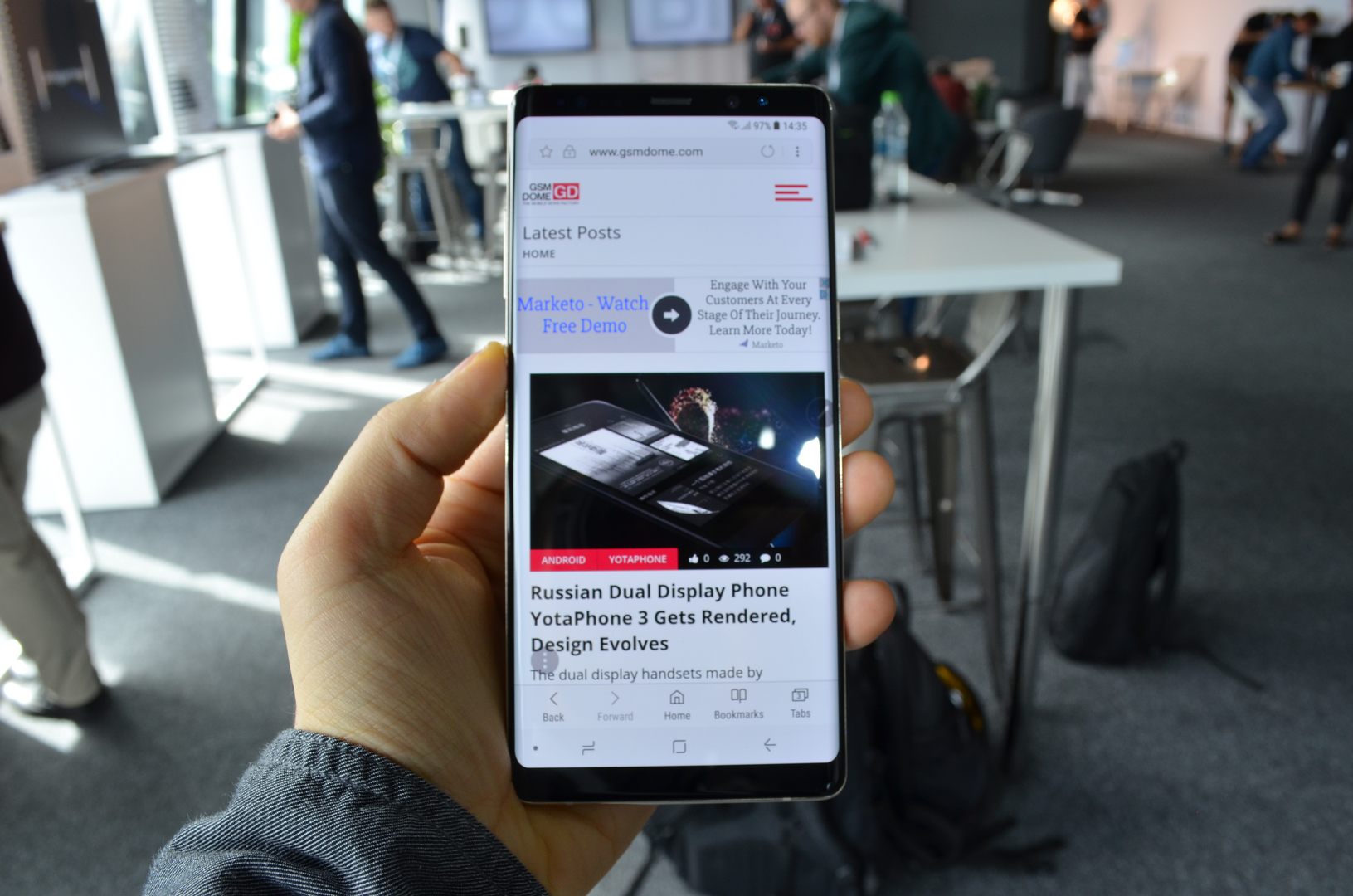 Samsung Galaxy Note 8 is here folks! And with it comes the inevitable hands on experience, that we did just as the device was ready to debut. We have a detailed video below, for you to enjoy, with our first impressions. First of all, this is a 6.3 inch phablet, that makes use of a stylus and comes with the expected glass and metal combo. 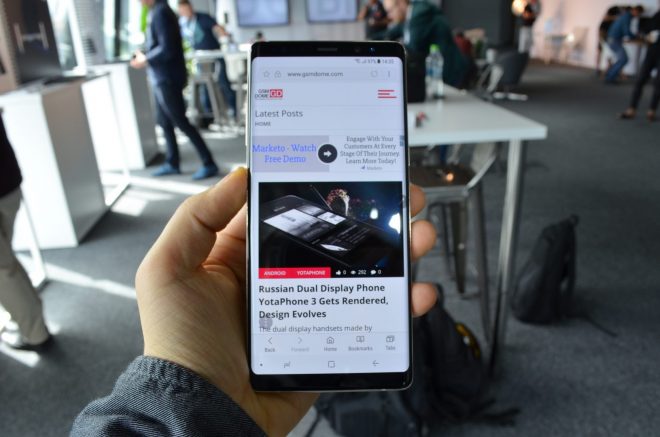 It appears that Samsung is set to replace PCs more than ever with this machine. We’re dealing with the logical expansion and extension of the Galaxy S8+, that was a 6.2 incher. This time around Infinity Display is a 6.3 inch panel, with Super AMOLED tech and also with HDR aligning to the LG G6 and other modern rivals. Yes, it’s still focused on productivity, but Samsung also bet on fun and high end photo and video capture, via a dual back camera. 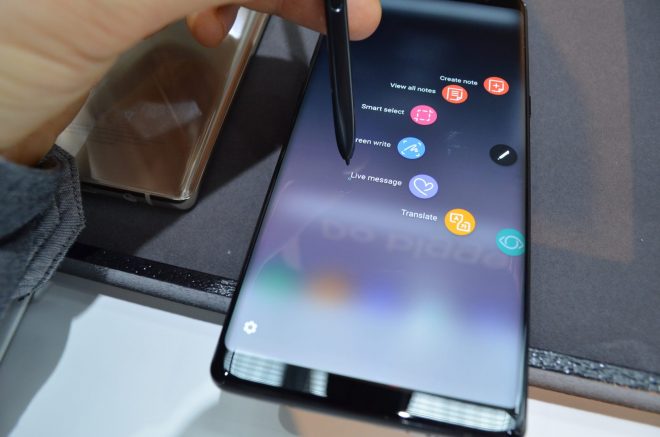 There’s some unexplained feeling that you’re getting a more sobre machine, like someone wearing a pinstripe suit, compared to the curvaceous S8 and S8+. Somehow more straight lines were applied and the fact that the device is soooo narrow, makes it easier to wield, although it’s less than an inch away from being a tablet, on paper. We have a sturdy metal frame to grab on to, with a bigger waistline of 8.5 mm this time. 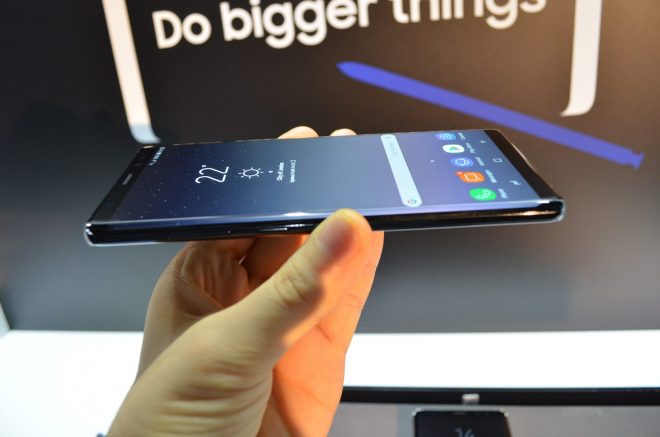 There’s a curved glass panel at the back and one at the front, but to me the corners of the screen are less curved than before, or at least that’s my first impression. The stylus has a clickable end, it feels very light in the hand it’s waterproof. Although Samsung didn’t insist on it, I wouldn’t be surprised if it actually worked underwater in tandem with the display.

The biggest innovation though has got to be the dual back camera. It features two 12 megapixels sensors and the real premiere is that they both do optical image stabilization. One of them has F/1.7 aperture and the other F/2.4. Aside from the stabilization, which by the way I saw in action with the aid of a special machine, there’s also excellent low light capability and a Bokeh feature with several levels of tweaks. 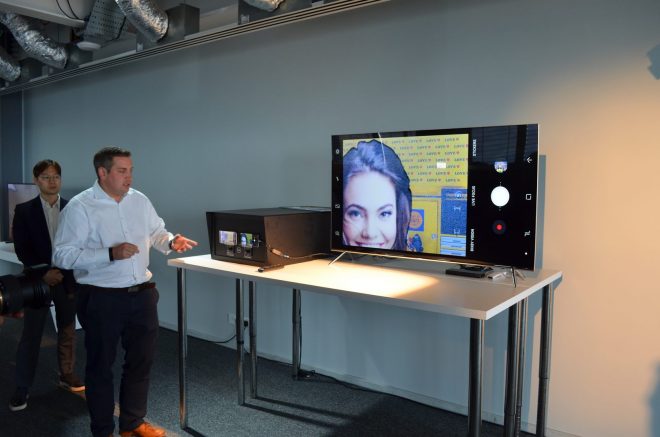 There’s something called live focus and 2X clear zoom, that may well be optical, although Samsung didn’t detail it. What’s certain is that having seen Samsung’s Bokeh in action, it’s certainly superior to what both Huawei and Apple are offering. You really have to see it to believe it. I’m not here to list specs, but the general specs list is 90% similar to the Galaxy S8 and S8+, with the same CPU and pretty much the same storage and finally a bump up to 6 GB of RAM.

The 3300 mAh battery sounds like Sammy is playing it safe and trying to avoid a Note 7 style debacle. No reason to panic or demand a 4000 mAh battery, as we’ve seen even battery less than 3000 mAh in capacity perform on the 6 inch Xperia XA1 Ultra, so Samsung’s optimization should be even better. We also get the same fingerprint scanner at the back as on the S8, but with a smarter placement and there’s an evolved iris scanner I didn’t quite get to text. 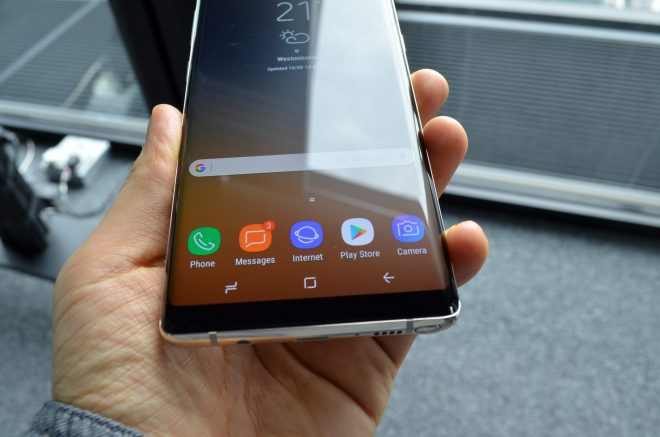 The Samsung software experience is also similar to the Galaxy S8’s, but this time with an emphasis on the stylus. It gets new Air Command functions, with Translate evolved to 30+ languages, Bixby Vision also added to the palette, Live Message, Screen Write and Smart Select. Note taking and a huge variety of brushes for drawing are here. You can take notes on the standby screen and even multiple page notes are available there.

Over 4000 levels of pressure are available from the stylus and the whole Live Message thing borrows from the latest Apple iMessage and its fancy laser effects for writing and other such funky stuff. The handset comes with Bixby and a dedicated Bixby button, it offers a Quad HD+ resolution and an 8 megapixel front camera. Samsung DeX has also evolved, now letting you do live videocalls, shown on both the monitor and handset, plus it gets expanded gaming features and even a better audio and video editing aspect. 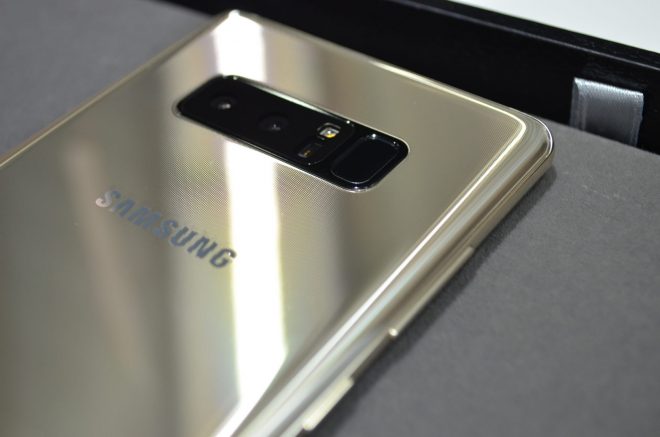 We’ve seen all of those tasks done seamlessly and live, in action, with the Note 8 at the core. Zero lag multitasking also happens and split screen is obviously part of the experience. Those who hesitated in buying the S8 as an upgrade for the Galaxy S7 Edge for example have zero reason to skip the Note 8. Hard to believe it gets better than this and honestly speaking, having seen the many iPhone 8 renders, I’d say that Samsung has a bit of an edge already. The dual camera for one is amazing and I can’t wait to test the device and see for myself what the final unit can do.