Straight from Korea comes news about the Samsung Galaxy Note II, that has replaced the Galaxy S III as the most awaited Samsung product this year. The new info points towards an October release, around the same time frame as the iPhone 5, so maybe it’s meant as a rival for it. The device is also supposed to use an unbreakable plane (UBP) display, a precursor to the flexible screen. 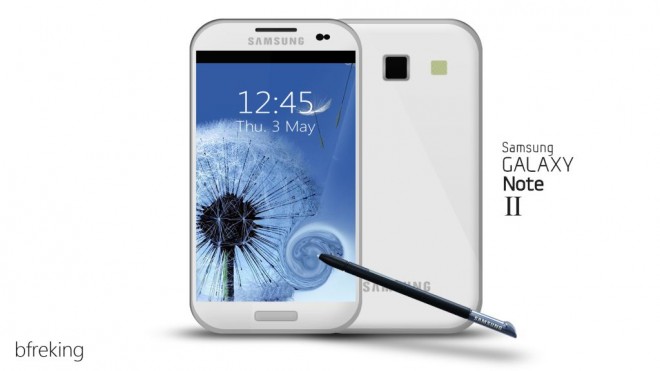 Apple will most likely release its new iPhone this fall, so the new Note will be just on time, provided that it doesn’t launch later than its announcement. Initially, the new Note was meant to debut at the year end, but that timeline changed. As far as design goes, the Note II is supposed to take on many elements from the Galaxy S III, so we expect a bigger version of it, much like the first Note was the big version of the Galaxy S II. The thinner display rumored to be present on it will allow a slimmer waistline and give more space for the baseband core chip and application processor.

Galaxy Note II is said to pass the 5.3 inch mark this time and it could reach as much as 5.5 inches, still keeping it in phablet range and not tablet. Longer battery life, sturdier build and better shock resistance are all among the specifications. It also has a quad core CPU and that’s most likely the Exynos unit on the Galaxy S III. Finally, the piece on our South Korean source mentioned below ends with the preinstalled Android Jelly Bean on the Galaxy Note II. What do you think? Is the info real?