If you’re a Verizon fan and Samsung fan there’s a double reason to be happy, because the brand new Galaxy Note II is coming to the carrier with LTE next month. Meanwhile, the device was photographed in the Verizon branded version and the result can be seen below. This white version is pretty much identical to the one Samsung showcased, except for the branding. 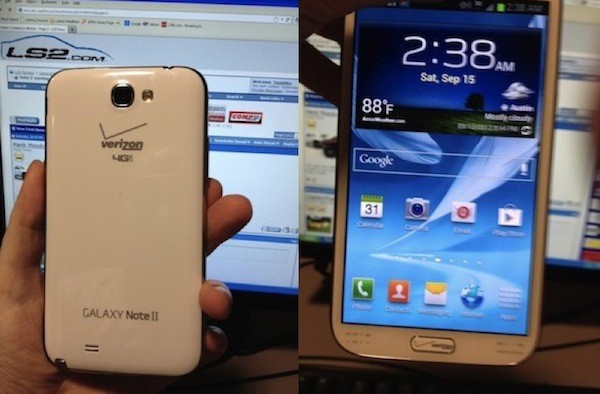 The back of the handset sports the Verizon 4G LTE logo and there’s even another logo placed on the home button, so talk about exaggerated logos all over the place… The source of the photos doesn’t seem too sure that these are genuine shots, but the picture lines up with what we found out earlier in the week: Note II will have AT&T and Verizon compatibility. Now we’re expecting some leaked system info from Verizon or maybe a new visit at the FCC. Meanwhile, I expect this model to be the same Exynos quad core unit that Sammy announced, with 2 GB of RAM and all that.

This model also has a 5.5 inch HD screen and I wonder if they will switch the CPU and replace it with a Qualcomm Snapdragon, since they did the same thing with the Exynos on the Galaxy S III, so they could go about it in the same way. I’m not familiar with the situation, is this the same problem with Exynos as the one with Tegra 3? No good with US LTE? Can you enlighten me?