Samsung Galaxy S III has finally reached us for a detailed review and we’ve done quite a lengthy video, that you can watch below. We are dealing with one of the best handsets launched this year, so we gave it a proper treatment. Today is an important day, since this is the day when the Galaxy S III goes on sale in USA, at around $200 on various contracts. Let’s see if it’s worth getting! 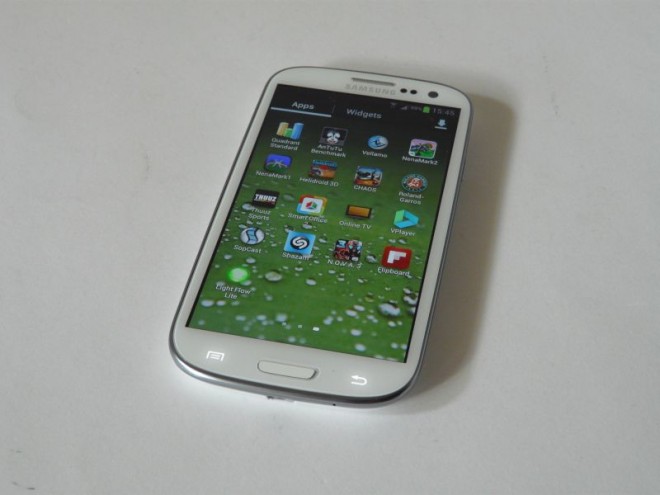 The handset comes in pebble blue or marble white and it’s available in 16GB, 32GB and 64GB versions. This new Galaxy S was announced in early May and released internationally at the end of may after an incredible number of 8 million preorders. The design is “inspired by nature”, as Samsung calls it and you’ll feel that both in the sexy curves of the handset, its water drop-like sounds and flowery wallpapers. Galaxy S III uses a brushed polycarbonate shell, measures 8.6mm in thickness and weighs 133 grams. The first problem already appears in the design department: the device is extremely slippery, especially if your palms are sweaty.

I recommend you buy a special case with extra grip if you don’t want to drop this phone! Anyway, you should also know that the phone’s On/OFF button is on the right side, while the left side holds the volume buttons. At the top there’s the audio jack, while at the bottom we have the microUSB port. Finally at the front there’s the front camera, earpiece and sensors, 4.8 inch screen and physical Home button, plus two capacitive buttons (menu and back). At the back there’s the 8 megapixel camera with LED flash and under the hood we find a 2.100 mAh battery, microSIM slot and microSD card slot. 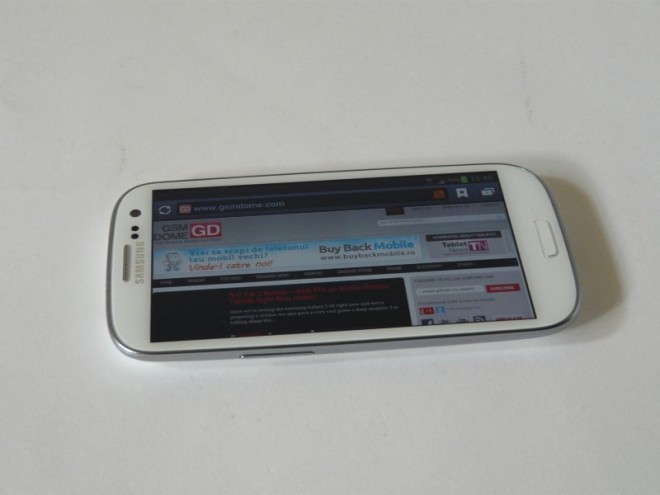 Samsung Galaxy S III has a 4.8 inch Super AMOLED screen with a 720p resolution and Gorilla Glass 2 protection. Back to the Home button, this one has 3 uses: the normal one triggered with a single press, the S Voice assistant with a double tap and the task manager, triggered by keeping the Home button pressed. Sadly, this Home button is embedded too much into the lower side of the phone and it’s quite hard to press. As far as the screen goes, its main flaw is the fact that it reflects sunlight greatly and when watching a movie it’ll be very hard to actually see something on the screen. Now let’s get to the specs…

We’re dealing with a smartphone that features 1GB of RAM, 16/32/64GB of storage, HSDPA 21 Mbps connectivity, WiFi, DLNA, WiFi Direct, Bluetooth 4.0, NFC (chip in the battery) and microUSB 2.0. At the back we have, as I said an 8 megapixel camera with LED flash, autofocus, simultaneous photo and video capture and support for 1080p 30 fps video capture. At the front there’s a 1.9 megapixel 720p 30 fps camera for videocalls. The star of the smartphone is definitely the quad core Exynos 4212 processor at 1.4 GHz, that involves a Mali 400MP GPU, which makes games look great, just like NOVA 3 does for example. 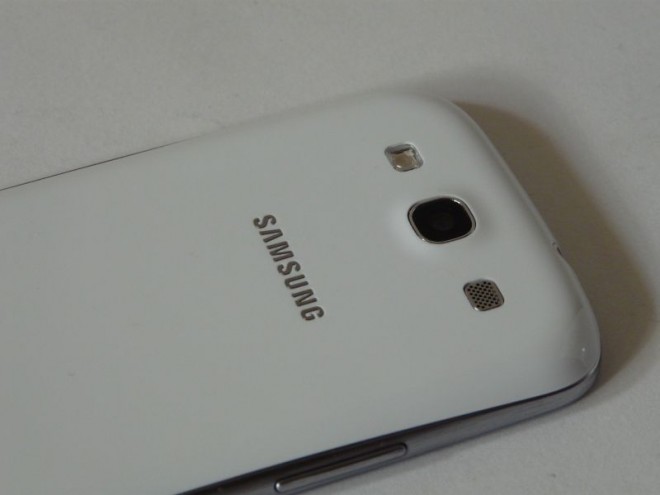 This CPU was perfect and performed great in both benchmarks and under stress from games, HD movies and heavy multitasking. Other features of the handset include an accelerometer, gyroscope, proximity sensor, compass, barometer, stereo FM radio and 48GB of free storage on Dropbox, for 2 years. The 2.100 mAh battery provides 21 hours of talk time (2G) and about two days of normal use. One thing to also mention about this phone, going back to the display a bit is the fact that its auto brightness has a much too low level. However, you get multiple brightness settings in the browser, for example.

On the benchmark side, the phone takes on bravely the HTC One S and One X and outscores them in many tests. Galaxy S III scored 5482 points in Quadrant, 9921 in AnTuTu and 58 fps in NenaMark 2, compared to the 4600 points of the One X in Quadrant, 11.200 in AnTuTu and 47 fps in NenaMark 2. We had a special segment in the video review where we show you all the special features of the handset, those advertised by Samsung. I’m talking about pop up play, the feature that allows the movie playing video to be minimized and moved around the screen. 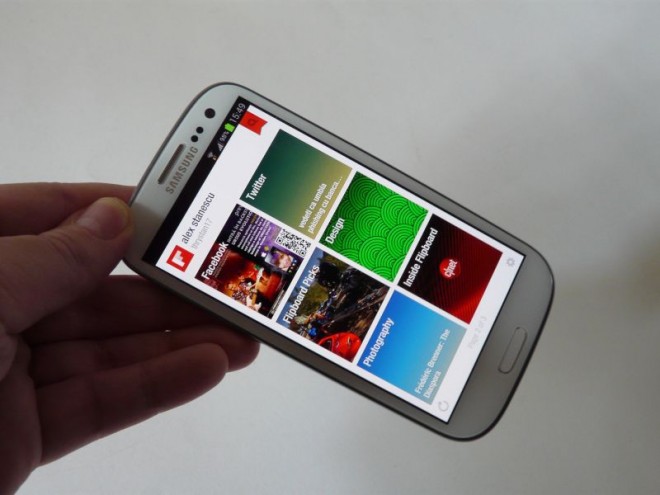 There’s also S Voice, the virtual assistant that’s no match to Siri, as shown in the video. There’s also Smart Stay, that tracks your eyes watching the screen and stops the screen from going into standby. Various other gestures and motion controls are also detailed in our huge review below. I was happy with the music volume and call quality and particularly happy with the headphone experience, thanks to the Wolfson Micro chip on board, that actually offers an experience on par with Beats, or even better. As far as camera goes, you get HDR, panorama, burst shot, a few effects and some pretty good photos and videos in daylight. Indoors, the camera is crappy though… It doesn’t handle low light at all, even with the flash on.

Overall, this is a great phone, but it does have its caveats. One of them is that it slips from the hand easily, also the camera performs in a mediocre way indoors, plus the Home button is uncomfortable and the display is sometimes rubbish under the sun. However, we liked the fluid OS and interface, powerful processor, incredible graphics in games and we felt right at home using Android on this device. For that it gets an 8.83 out of 10 from us and I hope to see much feedback from you below!