We’ve had enough Galaxy S III leaks to last for a lifetime over the past weeks and now we have one more, this time not one of the device, but a picture of its screen protector instead. The protector is applied to the Samsung Galaxy S II for comparison sake, so we can get a better idea of what to expect here. 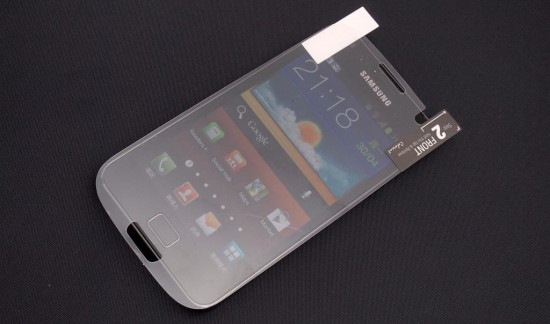 Notice how big the protector is compared to the 4.3 inch display of last year’s hot Samsung smartphone. This seems to fit with the rumors saying that the new device will have a 4.7 or 4.8 inch display. Also, I can see that the lower part of the protector is rounded, fitting those leaked pictures from last week, showing us a Galaxy S III with rounded corners. The physical Home button is also confirmed to be present, bigger and with rounded edges. One must also notice that the screen protection is about as wide as the Galaxy S II, so the width of the new model hasn’t been increased by much.

Samsung is expected to unveil the new Galaxy S unit tomorrow, May 3rd during a special event in London. Right now we have a bunch of things confirmed: the quad core Exynos processor, the big display with 720p resolution, 8 or 12 megapixel camera, Android 4.0 and the name Galaxy S III. Will this model be a disappointment or a surprise? What do you think?