Samsung Galaxy S III has finally arrived at our HQ and we’re preparing to put it through numerous tests. Till then we give you its unboxing, shown in the video below. As you probably already know, the Galaxy S III is a quad core Exynos handset, with a 4.8 inch HD display. 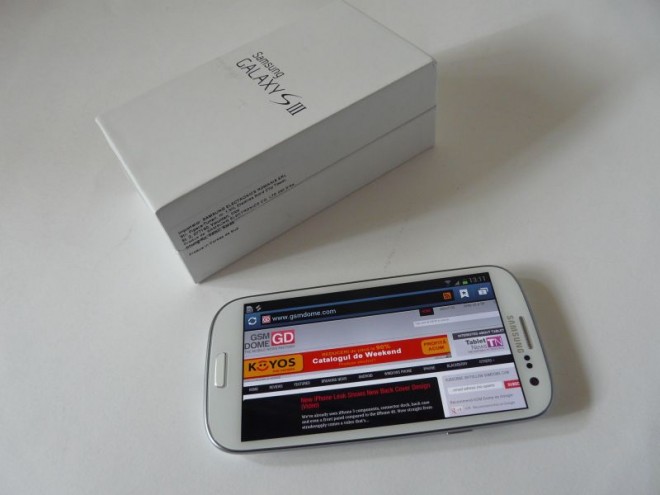 The device is priced at $200 on contract in USA and about 500 quid off contract in the UK, if you want a general price range. Our test unit is available in marble white, but there’s also a pebble blue version out there. The device is available in 16GB/32GB/64GB versions and it was unveiled early last month, only to be launched internationally at the end of May. It’s Samsung’s first quad core phone, with a Exynos 1.4 GHz processor, 8 megapixel camera and 8.6mm thick case.

Inside the box of the Galaxy S III we found manuals, earbuds, earbud plugs, USB cable, charger and the battery of the phone inside a small plastic bag. Also, just so you know, the back cover of the handset and its case are not made of “mere plastic”, but rather polycarbonate, a plastic material that’s more resilient than usual plastic. It’s protected against scratches and rougher contact. The phone uses a microSIM card slot and a 2100 mAh battery, in case you’re wondering. More details in the following days and a full review next week!