Motorola Droid RAZR HD leaked just a day ago in a bunch of pictures online and now there’s a fresh leak to complete its picture. The handset’s Nenamark 2 results are impressive, around 59 fps, a result that’s also scored by the Samsung Galaxy S III unit we’re testing right now. 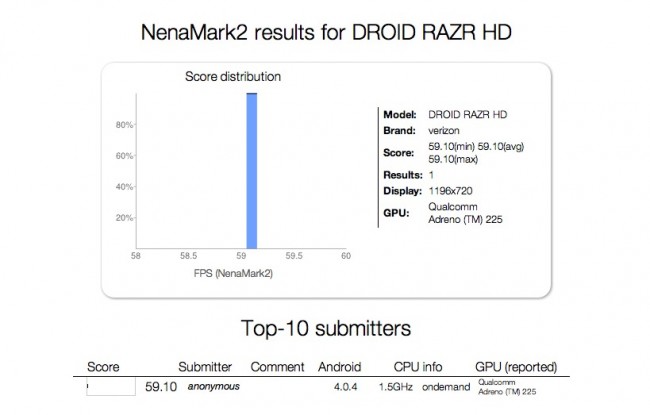 The same benchmarks reveal that the phone has a display resolution of 1196 x 720 pixels and a 1.5 GHz dual core Snapdragon S4 Krait CPU. Android 4.0.4 powers the gadget and the Droid RAZR HD sounds like a marvelous gadget, if you ask me. This handset is everything that the original Droid RAZR should have been, especially since that model was launched in China in an upgraded version with HD display and 13MP camera, much to the spite of the US and European public.

Now Motorola makes up for that, by offering a handset that’s rumored to have not only the 720p screen, but also the 13 megapixel camera. If you add in the mix the potent battery on the Droid RAZR MAXX and a slim waistline, then we finally have a great rival for the HTC One X and Samsung Galaxy S III.