If you want to decided what to buy, between the Galaxy Note and the fresh Samsung Galaxy S III, the video comparison below may help you. On one side we have the 5.3 inch smartablet that already generated sales of millions and on the other we have the quad core 4.8 inch smartphone. Luckily Slashgear had some fun with the Galaxy S III during CTIA and came up with a comparison. 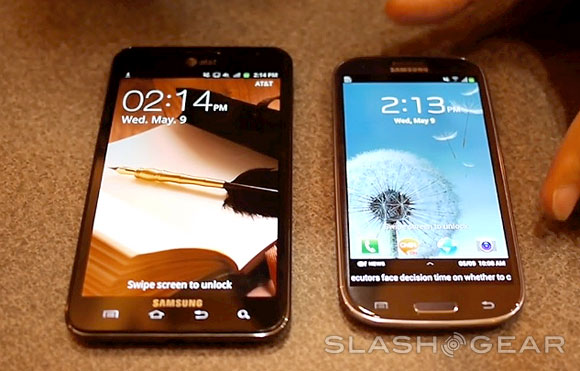 On the performance side, the new Galaxy S has the upper hand, since it uses a quad core Exynos processor, compared to the dual core Exynos on the Galaxy Note. As far as screens go, the battle is tight, since both models have Super AMOLED displays and the resolutions are similar: 1280 x 800 for the Galaxy Note and 1280 x 720 for the Galaxy S III. However, due to the diagonal the pixel density is better on the new Galaxy S. The cameras should be about the same and I say that having tested the Galaxy Note’s 8MP shooter and having found it incredible.

Now the two models also share the OS, since Galaxy Note got Android 4.0 this week. However, the Note also has an extra: the S Pen stylus with all the lovely associated apps and the Premium Suite that came recently. It’s actually pretty hard to choose between the two, but the new technologies on the Galaxy S III (its cool voice assistant, pop up play, eye detection and more) make it the more modern and viable choice.