Samsung Galaxy S IV has leaked a lot recently, being spotted in a benchmark and rumored to appear in March. Now we get a new render, shown below, courtesy of Italian site TuttoAndroid. The image was apparently discovered back on December 27th 2012, on Picasa and we also have some info about a new codename for the handset. 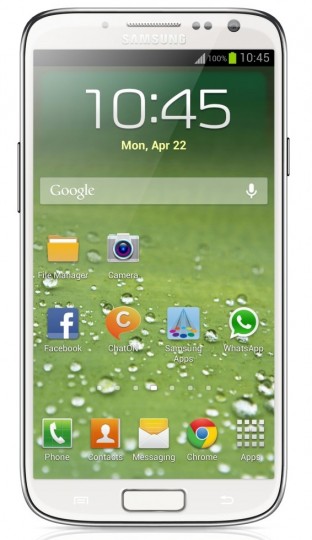 It’s rumored to be codenamed Altius and to go on sale in mid-April. The strange thing about the picture is that it has a battery percentage at the top, something that Samsung never includes on its device renders. Also, the Nature TouchWiz UX shown here is pretty much the same as on the Galaxy S III and I find it hard to believe that Samsung wouldn’t change anything about the newcomer. Last I heard, this model was coming on March 22nd, in a special Samsung Unpacked event, but as usual the grain of salt should be taken.

Speculations talk about a 5 inch 1080p handset with a 2600 mAh battery, wireless charging and availability in black and white. Rumors also include an Exynos 5 Octa 8 core CPU, Mali-T658 GPU, 2 GB of RAM and a 13 megapixel camera at the back, plus Android 4.2.1 Jelly Bean. The design is not that bad and it’s certainly prettier than the one of the S III.