Samsung Galaxy S4 was announced back in March and we previewed it in April, but then a few months ago we got to review it in the finalized version. We tested the I9505 version with a Snapdragon 600 CPU inside. The device is available right now in USA priced at $540 on Amazon. 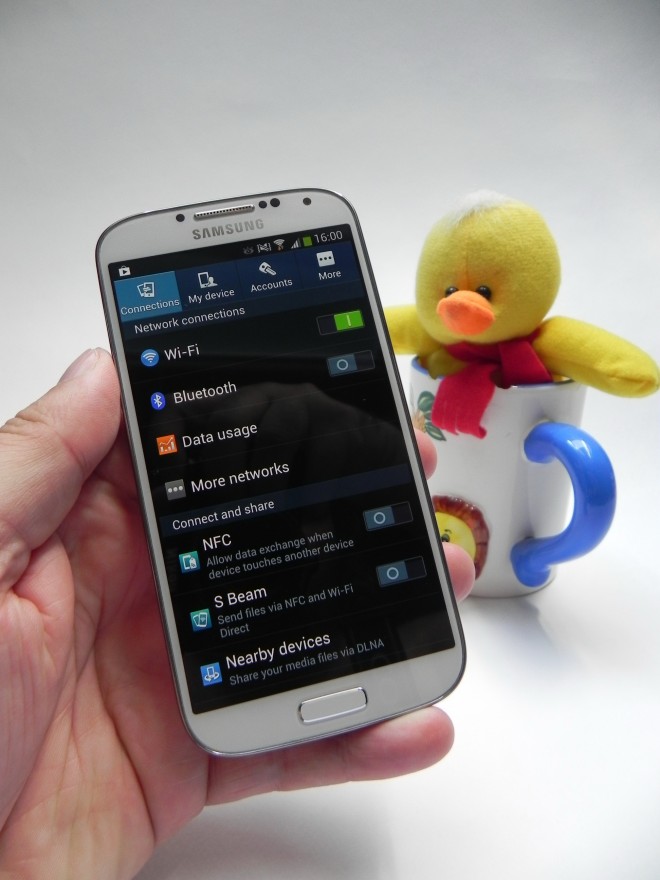 The handset sports a design language pretty much like the one of the Galaxy S III, but with a smaller bezel. The phone is comfortable to hold and it’s made of a glossy plastic material. It measures 7.9 mm in thickness, weighs 130 grams and slippery like the Galaxy S III. There’s a silver band around the sides and that’s plastic as well, but made to look like metal. The phone feels pretty solid in spite of the quantity of plastic used on its case.

At least the edges are flatter than the ones of the S III, so the design is less rounded. At the top we’ve got an infrared blaster and even though at first sight the device seems uncomfortable, it tends to grow on you over a few days. As far as hardware goes, we’ve got a microSIM card slot here, LTE connectivity, a 5 inch Full HD Super AMOLED screen with Gorilla Glass 3 protection, quad band GSM/GPRS/EDGE connectivity and 2 GB of RAM. 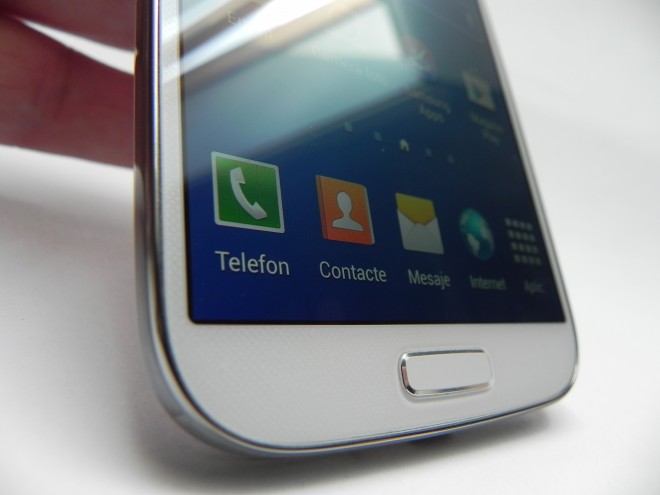 Inside the smartphone there’s a quad core Snapdragon 600 1.9 GHz CPU, an Adreno 320 GPU, but there’s also an Exynos 5 octa core version out there. We’ve got a 13 megapixel camera with LED flash at the back and a 2 megapixel front shooter placed at the rightmost area of the facade, at the top. Other specs include WiFi A/B/G/N/AC connectivity, WiFi Direct, DLNA, GPS and Glonass. The storage versions here are 16/32/64 GB and we’ve also got a microSD card slot with up to 64 GB capacity.

The microUSB port on this device supports USB Host and MHL 2.0 and back to the connectivity area, there’s Bluetooth 4.0, NFC, infrared and active noise canceling with a dedicated mic. The sensor area is very large here and interesting to cover. We get a RGB Light sensor, gesture sensor, proximity sensor, gyroscope, accelerometer, barometer, geomagnetic sensor, temperature and humidity sensor and a special cover sensor that involves the screen bezel somehow. 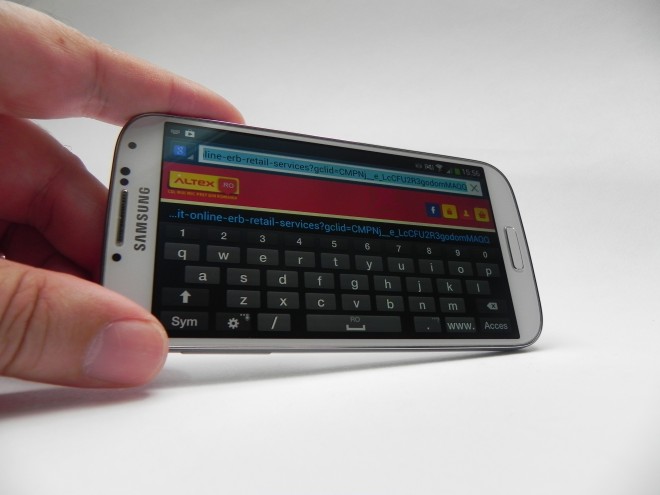 Finally, the battery of the Galaxy S4 is a Li-Ion 2600 mAh unit, that offers us about 20 days of usage with no problem and you can even get 2 days of usage if you really tighten your belt. As far as multimedia goes, the device supports FLAC and WAV files and offers a music square for mood selection for songs. There’s also an EQ here, with the option to customize your sound experience and functions like Smart Volume and Adapt Sound, the latter being used to calibrate headphones.

We’ve got excellent volume on this handset, even though HTC One is much louder, I have to say. The bass is excellent on the S4 and there’s no distortion. Voice is clear and the headphones sport a brand new design, that involves an 8 mm tweeter and a 10 mm woofer. Overall, the audio is superb. Moving on to the screen/display/video are, we’ve got a 5 inch Full HD display here, a Super AMOLED one with Pentile matrix and 206 lux units of brightness, which is much, much lower than the 500 units of the HTC One. 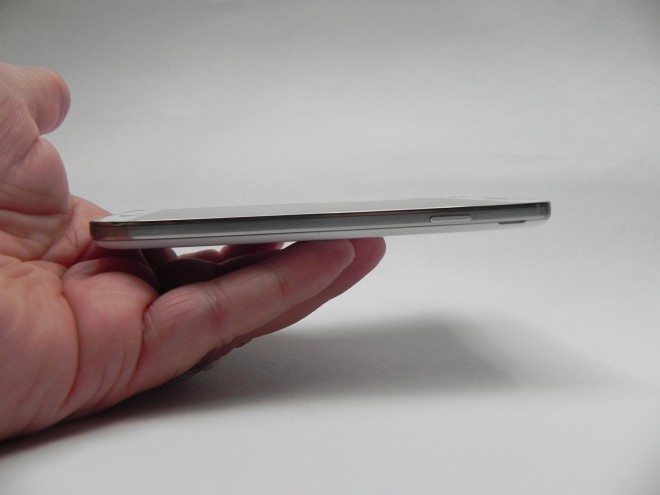 The black level is excellent with 0 lux on a black background. View angles are perfect, contrast is excellent and color saturation beats all the phones on the market. AMOLED brings a slight oversaturation, but you can tone it down from the settings. As far as the camera goes, we’ve got a 13 megapixel shooter with F/2.2 aperture and 4.235 mm focal length.

There’s a 69 degree angular field of view here and the sensor of the camera measures 1/3.06 inches. The pixel size is 1.12 microns, certainly no match for HTC’s 2 microns. Among the options available here we find dual shot, that includes you in the pics you take with the aid of a front camera. We’ve got slow motion and fast forward video capture options available at the top of the screen and other options include panorama, HDR and much more. Closeups look nice, like those roses shown in the video review and we’ve also played with some of the effects shown at the bottom of the camera UI. 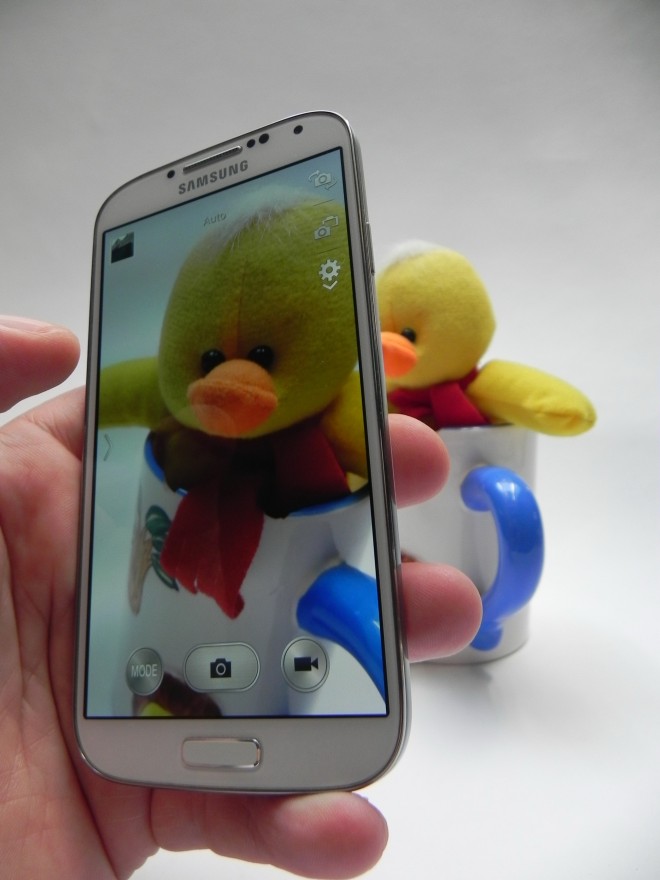 When filming video the zoom doesn’t quite decrease the quality and the day shots are overall better than the HTC One’s. Sound and Shot allows you to take a picture with background sound and you can also create GIFs and drama shots, showing an action in sequences. Colors in pics are slightly oversaturated, but the quality remains top notch. Indoors pics are a different story and they’re quite underwhelming.

The video is filmed in 1080p 30 FPS, at a 17 Mbps bitrate. The stabilization is pretty good when filming, as shown by that fountain video and we’ve got a good microphone here, as proved by our test during a Michael Bolton concert. Overall, the camera is superior to the one of the iPhone 5S and Xperia Z, while it only beats the HTC One in daylight and it’s inferior to the LG G2’s.

Finally, in 3DMark we got 9951 points and in BrowserMark 2.0 2445 points, with the HTC One scoring 10.600 in 3DMark. The handset is able to reach a max temperature of 42.6 degrees Celsius when gaming, which means it’s kind of hot and it gets overheated in the area around the camera, just so you know. 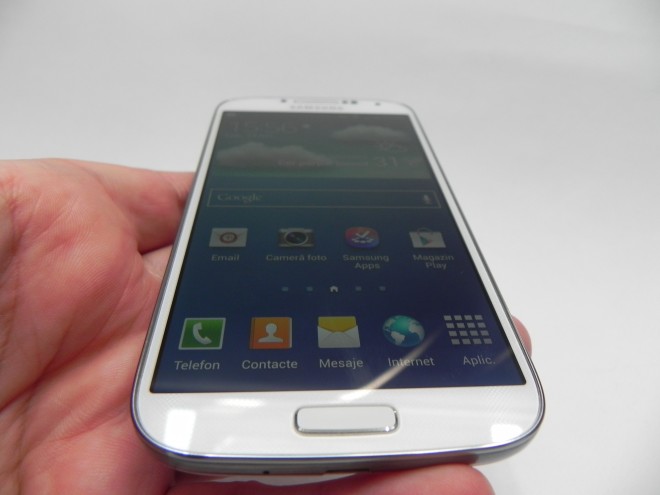 Special features here include the likes of Air View, Air Gesture, Motion control, Smart Pause and Smart Scroll. The virtual keyboard on this device is comfy and there are a lot of settings to tweak here as well. Handwriting is also an option, as well as vocal input. The preinstalled apps on this model include S Planner, Samsung Apps, Samsung Hub, with the latter being a tad redundant when taken into the same equation as the first. There’s also WatchOn that includes a remote and TV channels and we’ve got a S Voice to rival Siri. S Translator handles your translation from both voice and text and there’s an optical reader as well.

S Memo is basically a note taking app on steroids and S Health for me is basically a selling point of the device, since it’s very useful to track the stats of your health, from the humidity, temperature, steps taken during a day and even weight and blood pressure. And now for the verdict…

Here are the Pros of this device: