The week started with a nifty rumor about the Samsung Galaxy S4, supposed to come at MWC 2013, for an official unveiling. Following that story, put out there by a Korean publication, Samsung took to Twitter to dismiss all rumors and advise us not to believe in speculations. And now on day 3 of the same week we’ve spotted a benchmark of a mystery Samsung phone, that might just the Galaxy S4. 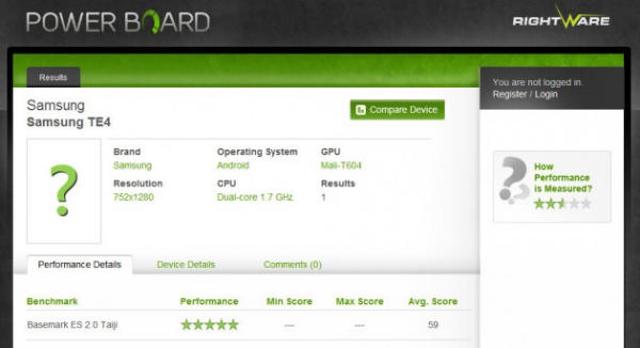 Rightware’s test results show us a model called Samsung TE4 with a Cortex A15 processor, exactly the same that Samsung demoed for its future products. The TE4 is said to be an Android handset, with a 1280 x 752 pixel resolution, as shown by the benchmark. It also packs a dual core 1.7 GHz Cortex A15 processor, that uses the already famous Mali T604 GPU, that generates the superb graphics shown in the video below. The real identity of the SoC could be Exynos 5 in the end, a CPU that was demoed weeks ago and was found to be very impressive.

Samsung is expected to deny once again this leak, but in the end this model could be something else entirely and not the Galaxy S4. The idea of a new Galaxy Nexus is not that far fetched, seeing how the anniversary of Android is getting closer and closer and a new Nexus phone should be incoming. What would you be more excited about? Galaxy S4 or the Galaxy Nexus 2?