The Samsung Galaxy S5 is supposedly 9 days away, since there’s an Unpacked event coming on February 24th, but that doesn’t stop carriers from anticipating things and teasing the device. O2 Germany is the first to do that, as shown below. 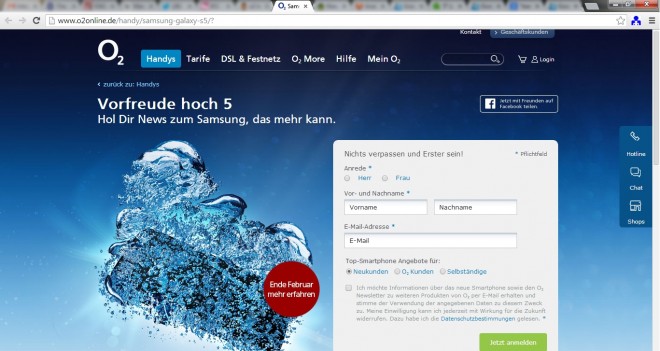 The carrier teased the Galaxy S5 through this poster on one of its website pages. This is supposedly a “Samsung that can do more” and in no way this states that we’re dealing with the Galaxy S5. By the way, the whole water thing makes me imagine a waterproof phone. Does O2 Germany know more than all the leaksters? Is the new Galaxy S water resistant?

Anyway, the German carrier claims that the new Samsung smartphone will be unveiled at the end of February, that lines up nicely with the Unpacked event at MWC. O2 didn’t provide any specs or price obviously, but the silhouette of the phone is seen a bit in the picture. What do you think of the whole waterproof thing?