The Galaxy S5 barely hit the shops and already there are leaks related to its related versions: Galaxy S5 Zoom, S5 Mini and maybe the S5 Active. Today’s news involves the Zoom unit, that has just hit the FCC under the codename SM-C115. 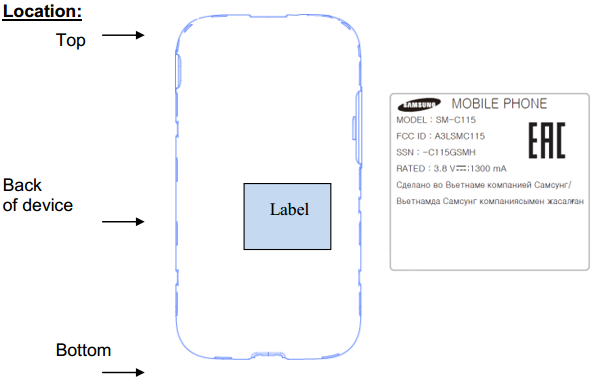 Previous reports associate this codename to the Samsung Galaxy S5 Zoom and the FCC confirms that the SM-C115 features NFC and LTE, but they also mention  LTE band 2 and LTE band 5, that are not widely used in the US. You can see above the diagram of the handset’s body, that showed up at the FCC and matches a previously leaked image.

Just like the Galaxy S4 Zoom from last year, this model is expected to have a powerful camera at the back, a 20.2 MP shooter with 10x optical zoom, optical image stabilization and Xenon flash. The rest of the features won’t be on the same level with the Galaxy S5 ones, but rather a Mini. So, we’ll get a 4.8 inch Super AMOLED 720p screen, the new Samsung Exynos 5 Hexa CPU and 2 GB of RAM.

There will also be Android 4.4 KitKat on board and sadly we have no idea when this model will be released.