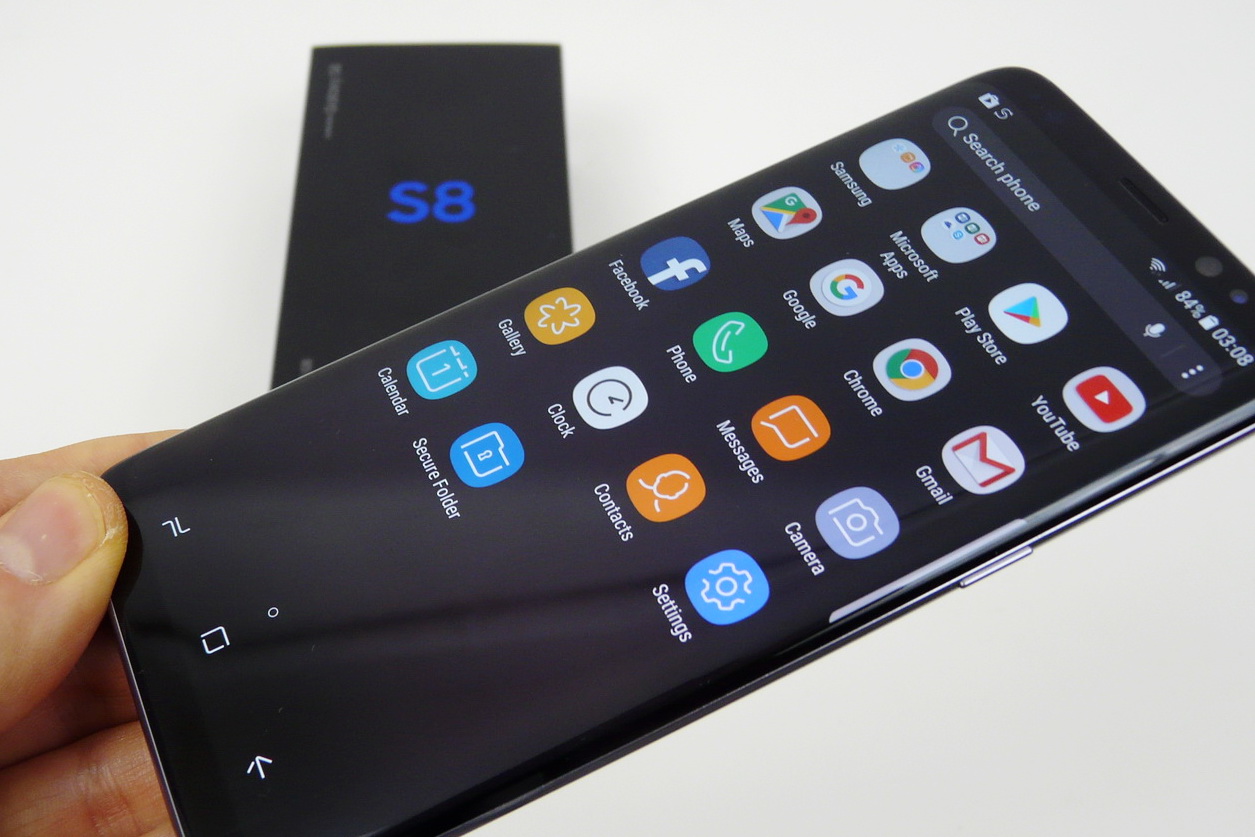 Samsung Galaxy S8 has finally reached GSMDome.com for unboxing purposes and you can check out the video of the unboxing below. The handset was unveiled on March 29th in New York and it’s priced at $750. It’s no regular flagship since Samsung has the daunting task of making up for the Note 7 and also impressing the Galaxy S7 fans with this newcomer. Let’s see how the first contact went. 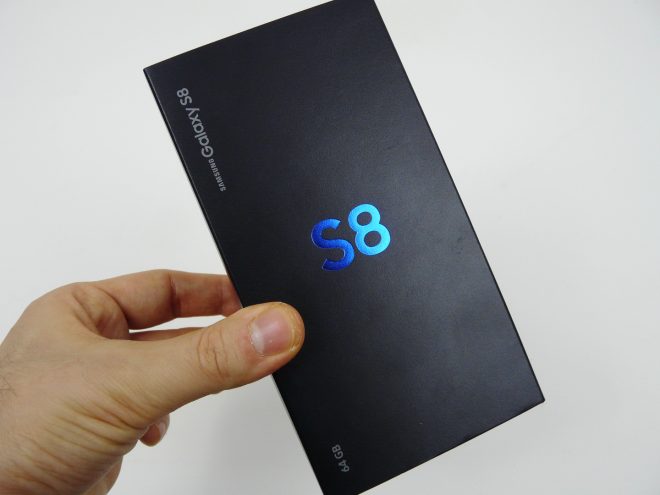 So, there are two versions of the phone, one with a 5.8 inch screen and the other with a 6.2 inch panel. Both share the Infinity Display concept, with ultra narrow bezels and curved edges, but in a less curvaceous fashion than the S7 Edge. These versions also split into two, one with a Snapdragon 835 CPU and the other with an Exynos 8895. We have the Exynos 5.8 inch model. 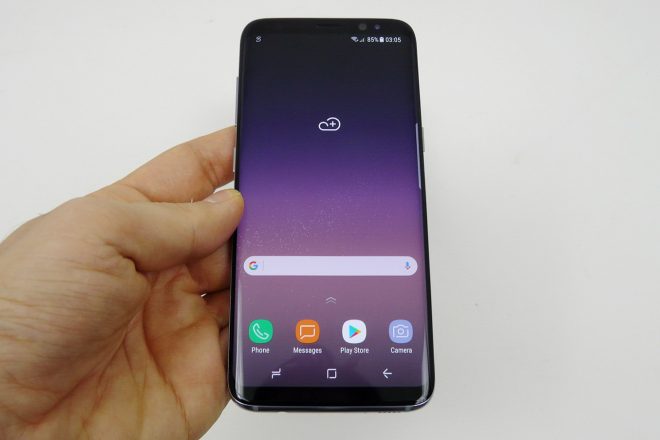 It comes inside an elegant black box, nestled inside another black box. Opening up the package reveals the phone, adaptive fast charging charger, USB Type C cable, manual and metal key. Then there’s also an USB Type C to microUSB adapter, as well as an USB Type C to full USB. These will aid people with transfering data from an older phone or simply doing transfers.

Finally we get a pair of AKG tuned headphones, that look and probably sound swell. AKG is now linked to Samsung via the Harman transaction and the design of the headphones reminds me of the ones that came with the ZenFone 2 and ZenFone 3. They have a wire that feels like shoelaces, extra sturdy and not easy to tangle. Plus, we also have spare plugs for the headphones. 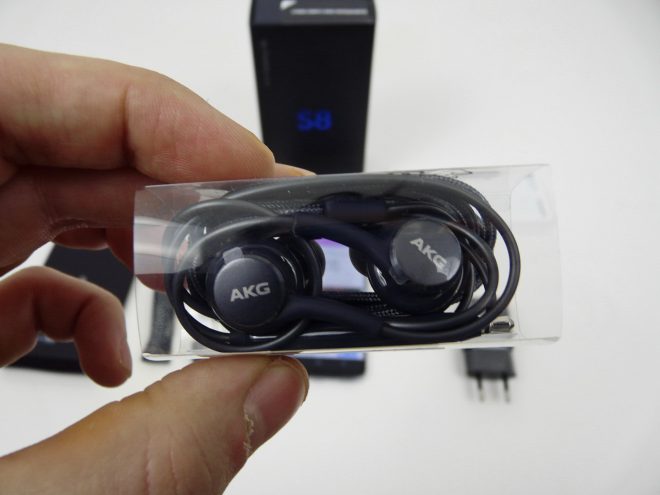 The Galaxy S8 is much more compact than one would expect from a 5.8 inch smartphone, that’s for sure. It’s also quite light at 155 grams, only 3 grams heavier than the S7, which is an impressive feat, I have to admit. Inside we get aside from the Exynos 8895 CPU, 4 GB of RAM and 64 GB of storage, as well as a 3000 mAh battery. The body is composed of a front panel made of glass with Gorilla Glass 5 protection, as well as a glass back. Sandwiched between them there’s a metal frame.

The handset is dust and water resilient and gives up the physical Home button in favour of a virtual one with haptic feedback. Well, it’s more like a standard vibration, far from the imitation of real input like on the iPhone 7. There are also virtual buttons for Back and Recents. Speaking of buttons, we get an extra physical one on the side, for Bixby, the new virtual assistant from Samsung. 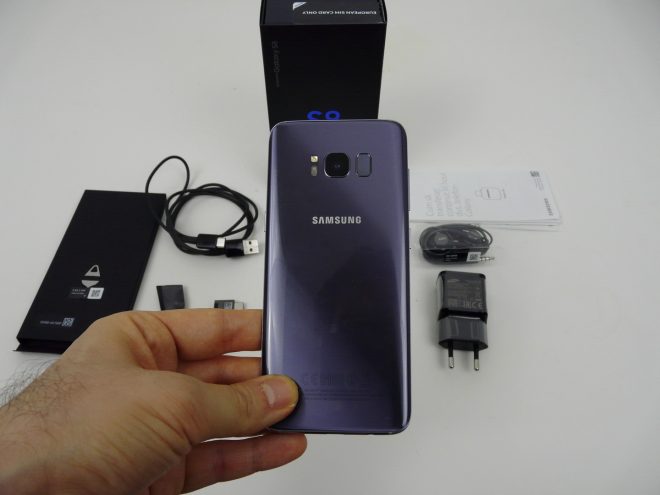 That one is powered by AI and derived from S Voice. It lets you do everything you do via touch, but with vocal commands. It show reminders, the weather, news and useful info like commuting paths and flights, for example. It also lets you perform queries and play music, plus much more. Samsung Galaxy S8 also brings a 12 megapixel back camera, with pretty much the same optical package of the S7: OIS, F/1.7 aperture, LED flash.

It does get a new sensor, either the Sony IMX 333 or a Samsung made one, while upfront there’s an 8 MP camera, an upgrade from the S7’s 5 MP shooter. Also at the front rests an iris scanner and the fingerprint scanner has been moved from the front to the back now. There’s still a pulse scanner in the mix and speaking of health, S Health now has a special feature that lets you get in touch with a doctor and get medical advice. 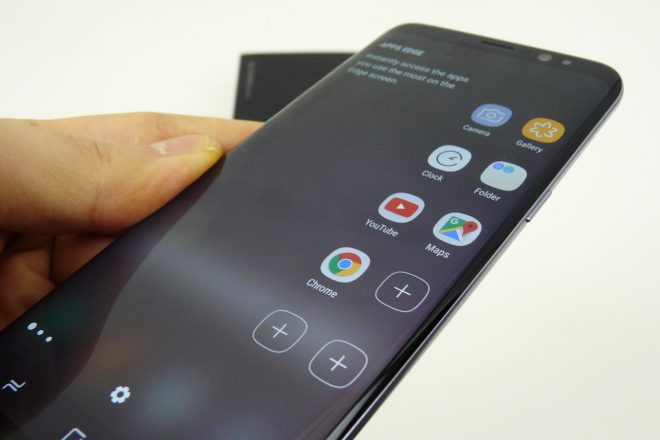 Finally, the software is Nougat with a Samsung Experience on top, a departure from TouchWiz, that feels more mature. The iconography has changed, colors have been toned down and the symbols and letters are “interrupted”, with a cool font to boot. Things feel really natural and fluid and the app drawer is triggered with a swipe up. The phone looks gorgeous with that ultra narrow bezel and curved corner QHD+ Super AMOLED screen and the image is very immersive.

It’s one of the prettiest phones in 2017 and we’ll be sure to review it soon. By the way we have the Orchid Grey version of the phone, for those of you wondering. You can get the handset here.