Samsung Giorgio Armani has already been reviewed, in spite of just being officially introduced by Steve Ballmer and Giorgio Armani in Milan. The smartphone that’s been reviewed by Phone Arena runs Windows Mobile 6.1, but the device will be shipping with 6.5 on board. 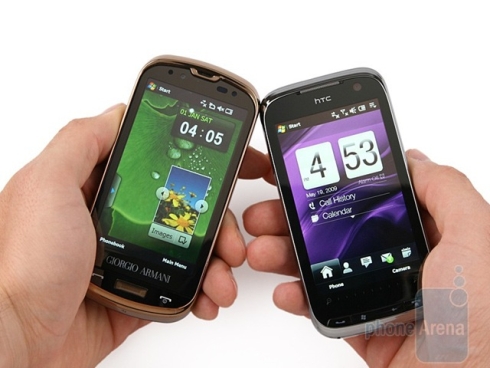 We’re dealing with a pretty large phone, that resembles Touch Pro2 in size and it’s also quite a heavy piece of gadgetry, that didn’t impress its reviewers, as far as style is concerned. Another drawback was the keyboard, also inferior when compared to the one on HTC Touch Pro 2, while on the bright side, there’s the media playback, which is pretty good on the Samsung Armani smartphone.

You’ll also love the 3.5 inch display, with its 480 x 800 pixels resolution and if you slide the screen sideway, you’ll reveal a keyboard, that can be tilted to an angle, for easier text entry. Keyboard buttons are pretty big and the space between them is enough, even for the biggest of fingers. Overall, this is kind of a kitschy device, because of it looks, but it manages to shine in the personalization pack department.

Here’s the full review, if you want more details.