That the GT-I9260 Galaxy Premier actually exists, confirmed by Sammobile earlier this month in a leak of the product specifications . According to the website it is a mid-range device that has a similar design to the Galaxy S III, and is coming from December on the for about 400 €. 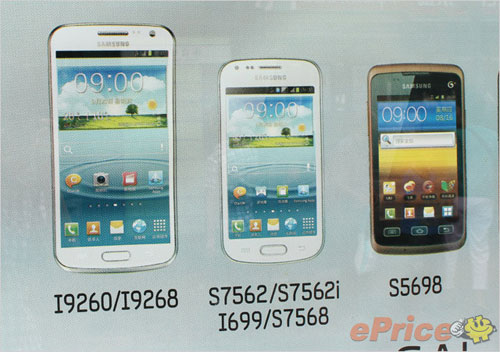 To date it was not yet clear what resolution will be delivered with the display of the 4.65-inch device. Recently however some GLBenchmark scores with the device surfaced and we can reveal more about the hardware configuration. The device will be offering an HD – 1280×720 pixels resolution display and runs Android 4.1.1. It is powered by a dual-core CPU clocked at 1.5Ghz, as opposed to the quad-core configuration found on the Galaxy S III.

The Galaxy Premier passed NCC certification just a few days ago and is expected to hit the market pretty soon. The phone has been spotted on a bus station ad in Guangzhou, China in an ad to the latest Galaxy Series lineup. The Premier is listed as model numbers – I9260 and I9268.