Samsung Illusion is a name that defines a new Android smartphone coming to Verizon, a device that’s just been leaked recently. Illusion is supposed to come very soon, although I can’t really tell how soon. What we see here is an official render posted by Samsung on its Flickr account. 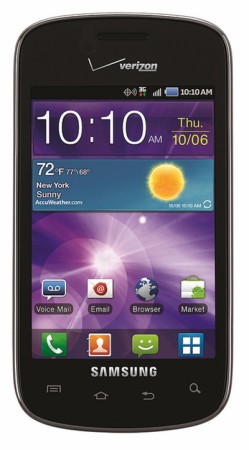 This means that the leak is a controlled one, courtesy of Samsung. Rumors say that we should expect Samsung Illusion to hit the streets around September 29 and it will come with a Sustainable Product Certification for eco-friendliness. Its model number is SCH-I110 and the specs are rumored to include an 800 MHz to 1 GHz single core CPU, a 3.2 to 3.5 inch 480 x 320 pixel touchscreen and a 3 to 5 megapixel camera.

Overall, this looks like a midrange model and we expect a pricing of around $100 for it from Verizon, with a 2 year contract. Any increase in the price would lower the sales considerably. Look out for a full release and press info in the next days.