After finding out more info on Samsung OmniaHD and BeatDJ, the first day of Mobile World Congress brings us a fresh official photo showing OmniaHD and Samsung BeatDisc, another pretty cool music phone. 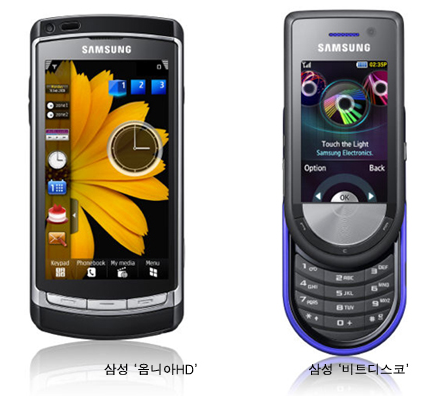 OmniaHD is not quite high-def in this shot, but I can tell you this much: it supports widgets. It’s pretty strange that the OS on it seems to be Windows Mobile, since a previous photo showed the S60 5th Edition UI on the device, but we’ll get this straight at the Samsung booth in Barcelona.

Samsung BeatDisc comes with an unique form factor, as least for a touchscreen music phone and it’s part of the same series as BeatDJ, a new and fun approach from the Asian manufacturer. We’ll update the info on these phones, once they start getting detailed at MWC 2009.