Just days after announcing its very own mobile OS, Bada, Samsung seems to be quitting Symbian, as one of its platform choices. Also, the company intends to release fewer Windows Mobile smartphones in the following years. 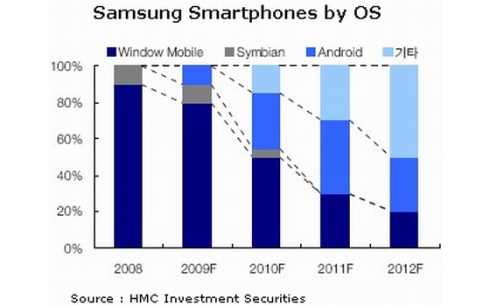 If you’re looking for certainty, they’ll stop making Symbian phones from 2011, while the number of WM handsets will be reduced to 20% in 2012. Also, the Android count is set to increase, with Samsung readying 10 such devices for 2010 and several based on Bada. It is estimated that in 2012, 50% of Samsung’s smartphone will run its own OS.

It’s interesting to note that Samsung is a founding member of the Symbian Foundation, so it’s pretty odd to see them backing out of it.