Samsung is one of the companies with the most touchscreen devices on the market right now and it seems that the handset maker managed to reach the performance of selling 50 million units of these recently. The milestone was reached this month, with 10 million units being sold in 2008 and 40 million this year. 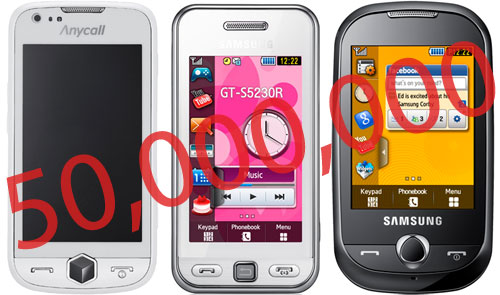 If we look into percentages, Samsung’s full touch phone shipments have increased four times in 2009. Touchscreen devices accounted for 5% of sales in 2009, while this year they reached 20%, out of the total 200 million units sold. This shouldn’t come as a surprise, considering the fact that Samsung launched quality handsets like Star (S5230), that’s also affordable and sold over 10 million units in six months.

Corby (S3650) is also doing very well, with over 3 million units sold since its launch in September. Europe is the primary market for Samsung, with 19 million touch handsets sold, followed by the US, China and South Korea, with 6.3 million, 3.4 million and 3.0 million respectively.