NTT DoCoMo had a big batch of phones announced this past May and among them we found the Sharp Aquos SH-10D. Now the handset has reached the FCC and after all the paperwork was done, the product was certified to work in all the nations that can sell it. The device has those strangely angled corners to set it apart design wise. 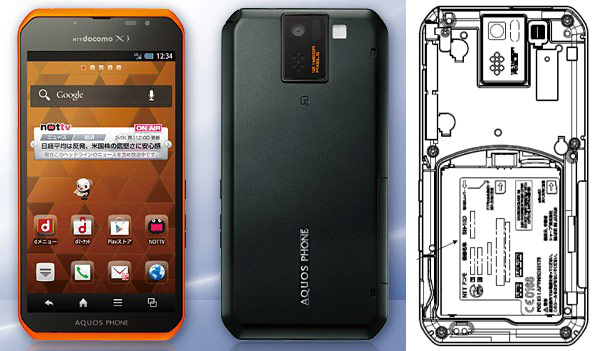 Other than that the specs are pretty good and they include a 11.3mm chassis, Android 4.0.3, a 1.5GHz Snapdragon dual core CPU, 1GB of RAM, 8GB of ROM and a 4.5 inch 720p display. The handset is expected to debut in August 2012, according to rumors and it supports GPRS, EDGE, UMTS, HSDPA and HSUPA connectivity. It also does LTE and has a microSD card slot, as well as a microUSB 2.0 port, Bluetooth 3.0 and WiFi b/g/n.

As it happens usually with Japanese phones, this model has an infrared port and 1-Seg TV tuner. At the back we find a 12 megapixel camera with autofocus and macro mode, while at the front there’s a 0.3MP camera. Sharp Aquos SH-10D is powered by a 1900 mAh battery.