Sixth Sense is a system that relies on projecting information on the surrounding objects’ surfaces, but there’s more to it than meets the eye. Pranav Mistry is a MIT student who has implemented the Sixth Sense technology and recently showed the world how it works. 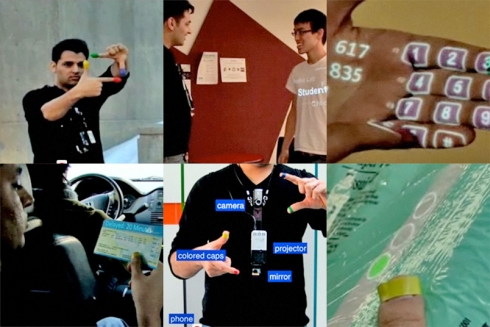 Sixth Sense is basically a mini-projector linked to a camera and a cellphone, acting like a PC connected to a Cloud, that stores your information on the web. The camera of this contraption recognizes objects around, while the micro-projector displays info on any available surface, even on your hand.

What’s more, you’ll be able to manipulate information with your fingers, as the projected image rests on your hands and you can interact with it freely. The real innovation behind Sixth Sense is the fact that it overlays digital information on real life and gives you a whole new perspective on interaction, or all sorts. Recognition applies to everything, so you’ll carry loads of information with you at all time.