The PSP Phone was once again caught on camera in action, in the hands of a very lucky user, as you can see for yourselves after the break. Also known as the XPERIA Play, the console-phone shows off a glossy case, a large touchscreen display and its gaming control system. 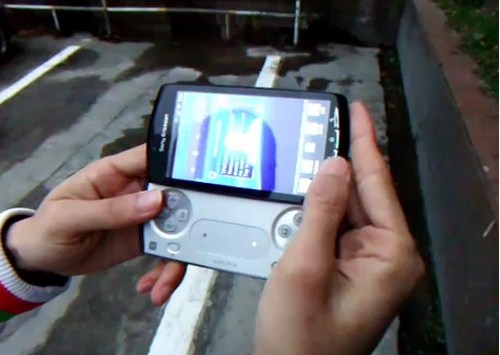 This new Sony Ericsson smartphone uses a 1GHz Snapdragon chip (second generation) and it’ll come with 512MB RAM, 1GB ROM and a landscape sliding set of gaming controls. There’s also a microSD slot on board, instead of the usual Memory Stick slot on the PlayStation consoles. XPERIA Play’s display should have a diagonal ranging from 3.7 to 4.1 inches and as far as apps and games are concerned, you’ll get them from Sony Marketplace.

Sony Ericsson’s console-phone will be running Android 2.3 Gingerbread, although version 2.4 is also an option. Here’s the hands-on video: