Sony has been preparing intensively for IFA 2012 Berlin and aside from the Xperia Mint, Xperia J, Xperia SL and Hayabusa models we’ll also see this newcomer: Sony LT25 Tsubasa. This device just leaked in the NenaMark 2 benchmark, that revealed some details concerning this newcomer. 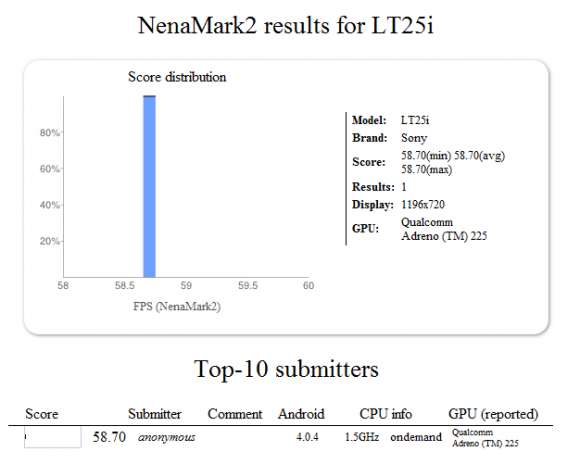 Tsubasa comes in LTE and HSPA+ models, with specs like a 720p screen, a dual core Qualcomm Snapdragon S4 processor and Android 4.0 ICS. The device scores 58 FPS in NenaMark 2, pretty close to the 60 FPS we scored recently on the ASUS PadFone, but explainable by the superior resolution of the Sony phone, that must move more pixels than the PadFone. The CPU on the Tsubasa is a 1.5 GHz one and the handset’s screen supports a 1196 x 720 pixel resolution. The 84 missing pixels are taken up by the on screen buttons in Android Ice Cream Sandwich.

There’s also an Adreno 225 GPU on board, so this is in fact the Qualcomm Snapdragon S4 MSM8960 SoC that’s available here. AnTuTu is showing the CPU frequency as 1.5 GHz and it appears that the LT25C version will be made by China telecom, while the SO-01E will be for NTT DoCoMo and the SOL21 will come to KDDI.