Sony may have launched at least half a dozen of new models this year, but they leaked almost as much, so there’s still a lot to see from the Japanese maker in 2012. A freshly leaked device is the LT30p model, that gets Bluetooth certification and some specifications leaked. 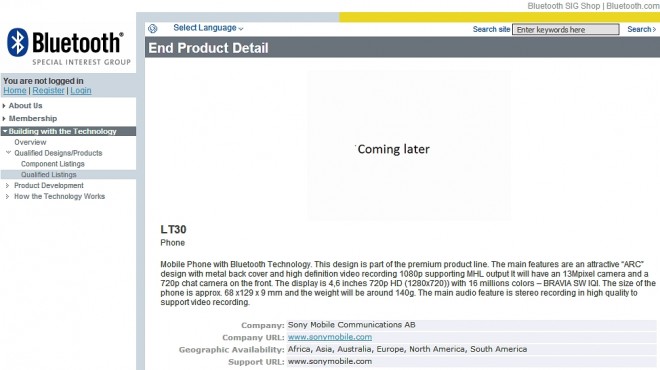 This handset is based on a Snapdragon S4 processor and a 720p display, making it sound like a HTC One S rival. The user agent profile of the smartphone revealed part of the features weeks ago. As far as software goes, Android 4.0 is on board obviously and it appears that this device will feature a 4.6 inch display and 13 megapixel camera at the back, with 1080p video capture, with high quality stereo sound. The front camera will support 720p video chatting.

If you’re wondering about design, we’re dealing with a premium phone, described as featuring “an ARC design with metal black cover”. The handset is 9 mm thick and weighs around 140 grams, that certainly sounds like Arc standards. Could this be the long rumored Sony Xperia Arc HD, that everyone has been talking about?