Usually we get leaks that involve a blurry shot or a mere photo taken by a mystery device. This time we’re dealing with a full on leak of the Sony MT27i Pepper, that came as a press render, shown below. We’ve been hearing about Pepper for a while now, so honestly I was expecting it at MWC 2012. Here’s the photo of the handset: 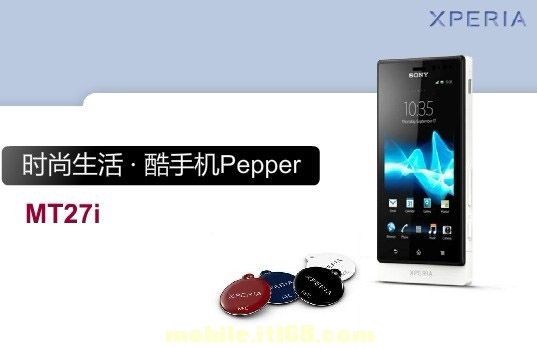 The phone is seen as a successor to the Xperia Neo (Neo V) and its specs are supposed to include a 1 GHz dual core processor, a 3.7 inch FWVGA display (480 x 854 pixels) and a 5 megapixel main camera. NFC support is also expected, as well as compatibility with Smart Tags, just like the Xperia S. The design keeps up with the current Xperia lineup format and as you can see we have 3 capacitive buttons at the bottom and a very clean look. What’s the deal with all these tags recently?

LG has a device based on tags and the LG Tag+ technology, now Sony and who knows maybe Apple will also discover NFC at some point. I can’t really figure out why devices such as the Sony Pepper and the HTC Ghost popped up after MWC 2012 and not during the show… Were they that far from completion?