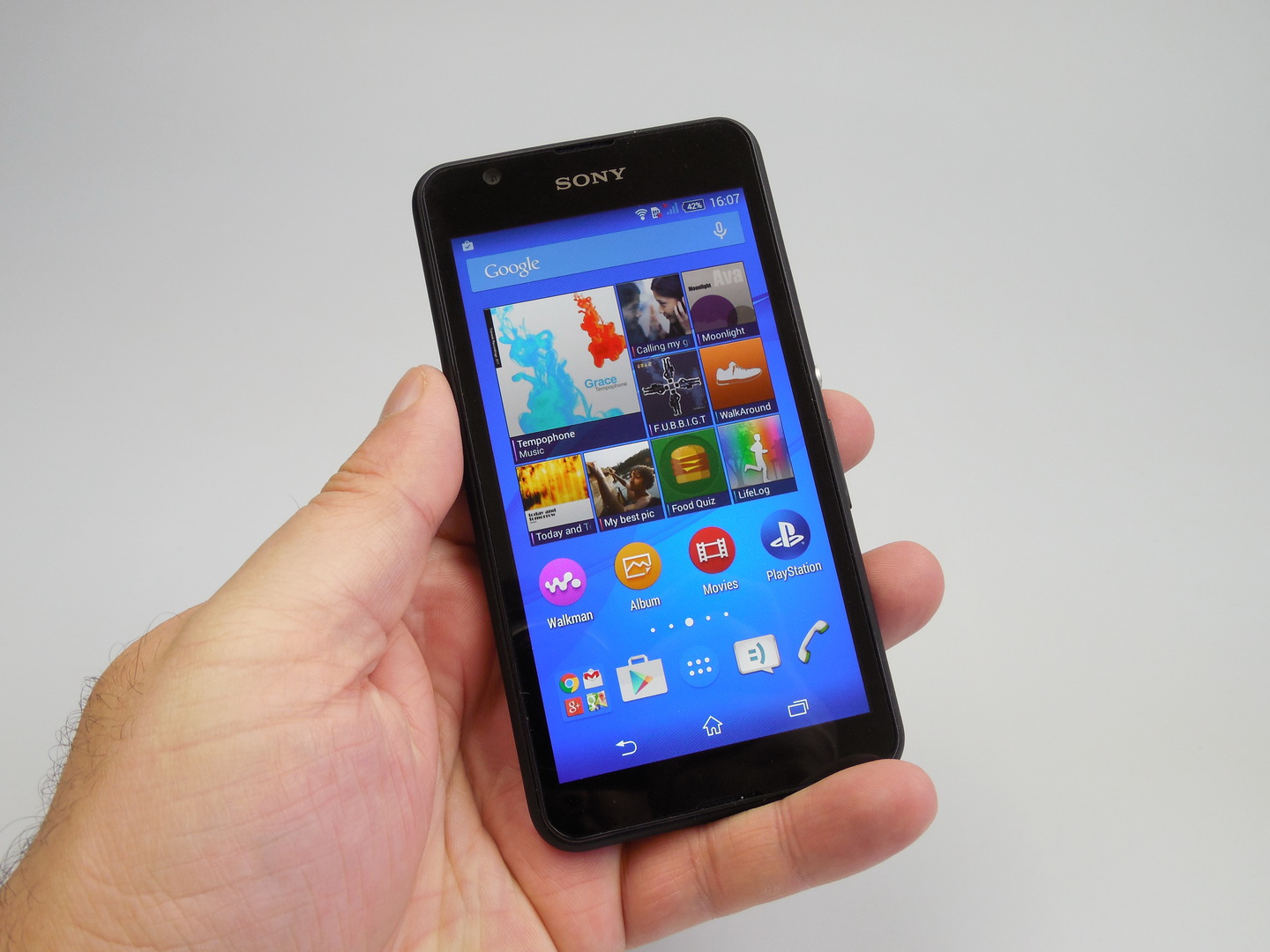 Yes, you’ve read it right, we’ve just reviewed the Sony Xperia E4 and we’re already reviewing the Xperia E4g. After all, the two models were launched just days apart, although the E4g debuted in April, after the E4. As the name says, this is an upgrade for the E4, that on paper only brings LTE as an extra. In reality, there are many more upgrades. 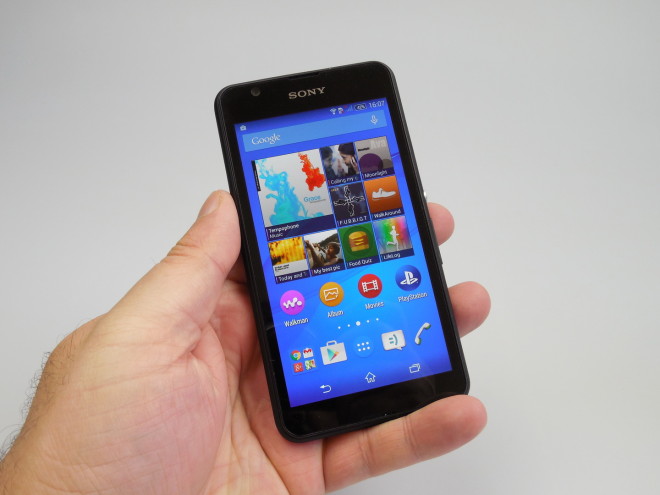 The device is priced at 129 euros in Europe and it’s a lower end Xperia with a budget price. The design involves a plastic case, with a soft touch back, that doesn’t feel as cheap as the one of the E4. We’ve got good grip and easy one hand use, probably because of the smaller diagonal (4.7 inch on the E4g versus 5 inch on the E4). The handset measures 10.8 mm in thickness, which is a bit thicker than the 10.5 mm of the Xperia E4.

The smartphone weighs 135 grams, which is less than the 144 grams of the E4. I should also mention that the LTE phone is 3 mm narrower than the predecessor. The back cover is still a wraparound one, that also covers the edges. Once removed it shows a non removable battery, a microSD card slot and the SIM slot. This model has a solid build and at the back we find the main camera, flash and microphone, plus the speaker. 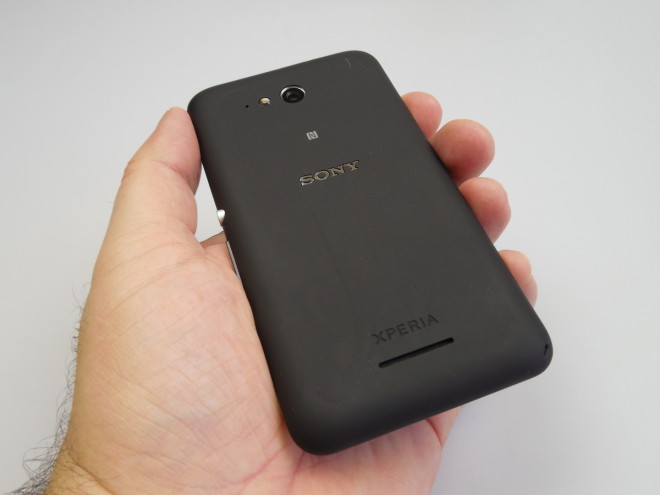 At the front there’s the selfie camera, notification LED and earpiece, while on the right we find the On/Off trademark button and volume buttons, both with good feedback. On the left there’s a microUSB port. Xperia E4g is not waterproof and it has rounded corners, plus it feels like an evolution of the E4. It’s both comfier and better looking. On the hardware side we’ve got a quad core Cortex A53 processor, clocked at 1.5 GHz, the Mediatek MT6752 (according to CPU Z), or the MediaTek MT6732 according to Sony’s site.

The GPU is a Mali T760 and these chipset features are certainly a bump from the E4’s MediaTek MT6582. Storage is 8 GB, of which 4.7 GB are free and there’s also a microSD card slot here and 1 GB of RAM. We’ve moved on to the benchmarks, where we had some pleasant surprises. We scored 10250 points in Quadrant, a jump from the E4’s 8445 and we beat the likes of the Karbonn Titanium S6 and Leagoo Lead 1. 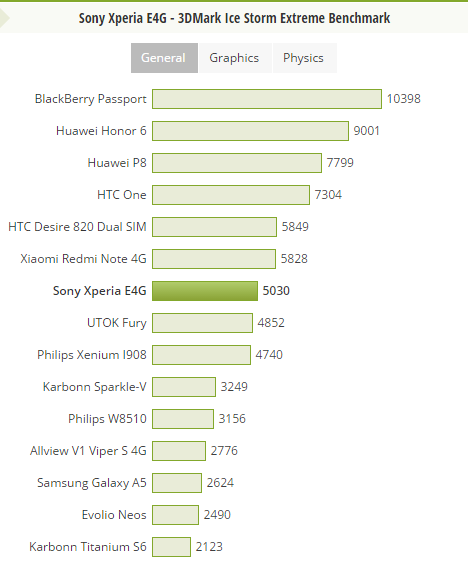 We were also close to the result of the Huawei Honor 6. In AnTuTu we got 32753 points, which is huge for a low end phone. We even beat the Galaxy A5, HTC One M7 and HTC Desire 820, while the E4 had only 18k points. 3DMark gave us 5030 points in the Ice Storm Extreme test, which means we beat the Galaxy A5, Karbonn Sparkle V and E4, with the latter scoring 2037 points.

GeekBench 3 gave us 726 points in the single core test and 2167 points in the multi core one, which is quite an increase from the 351/1174 of the E4. Once again, we beat the HTC One M7 and Galaxy A5, so those are very impressive results. Obviously, there’s no lag in the menus and a good piece of news is that apps open up faster than on the E4. 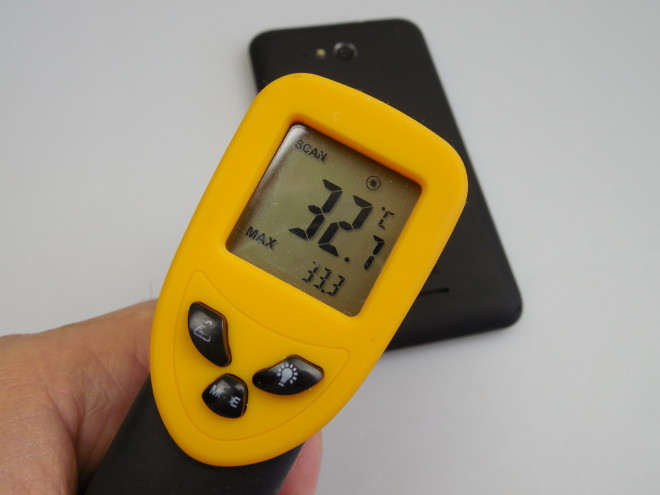 Games run OK and look fine on the smaller diagonal screen. There’s no overheating here, since after playing 15 minutes of the game Riptide GP2 we got to 33.3 degrees Celsius tops. The battery is a Li-Ion unit with a 2300 mAh capacity, the same capacity of the E4. On paper this battery offers 64 hours of music playback now, a bump from the 48 hours of the E4.

We did our own HD Video playback test, in a loop, with WiFi on and brightness at 50% we achieved 8 hours and 40 minutes of continuous playback, which is very impressive. The E4 reached 7 hours and 18 minutes and we even beat the likes of the HTC Desire 820, Galaxy Note and Amazon Fire Phone, gravitating around 7 or 8 hours. The charging is still pretty long, at 3 hours and 34 minutes, but still 10 minutes less than the E4. Settings include once again the Stamina options for battery saving, which turn data and WiFi off in standby, reduce brightness and throttle down the CPU. 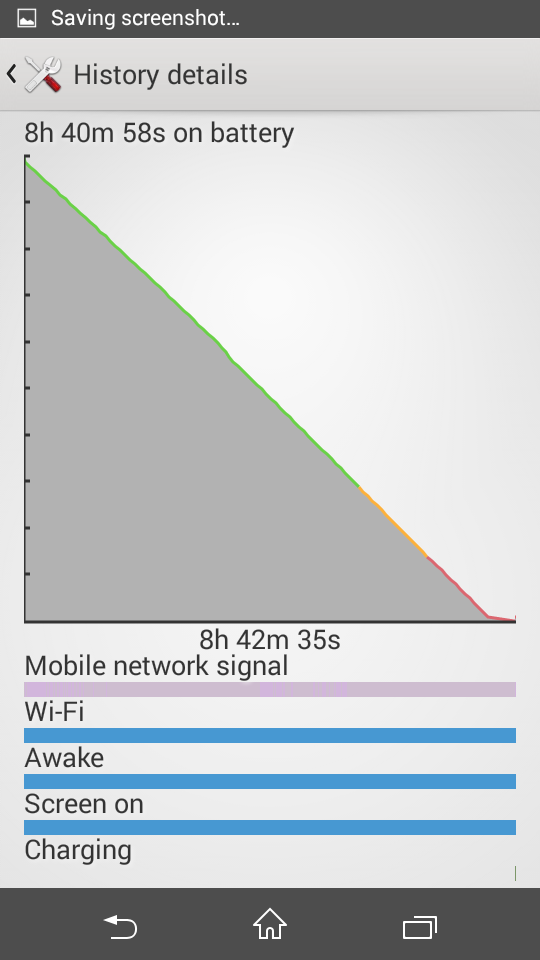 The Ultra Stamina mode gives the user up to a week of functioning and I have to remind you that Sony promised 2 days of battery life on the Xperia E4g and we feel that they delivered. As far as acoustics go, the Walkman player is still great, with a nice looking visualizer and the usual functions, like Clear Audio+, a 5 channel equalizer, headphone surround, XLoud and Clear Phase. The latter two must be kept activated for an improved acoustic experience.

The actual audio experience was quite good, with a loud and clear sound, plus an OK bass. There’s no more muffling like on the Xperia E4, but there’s a slight drawback here: a bit of distortion at max volume. The headphones bundled with the handset come with a big remote, a wire that’s easy to tangle and they don’t sit very comfortably in the ear. The sound is very good and so is the bass in those headphones, plus the volume is quite high. 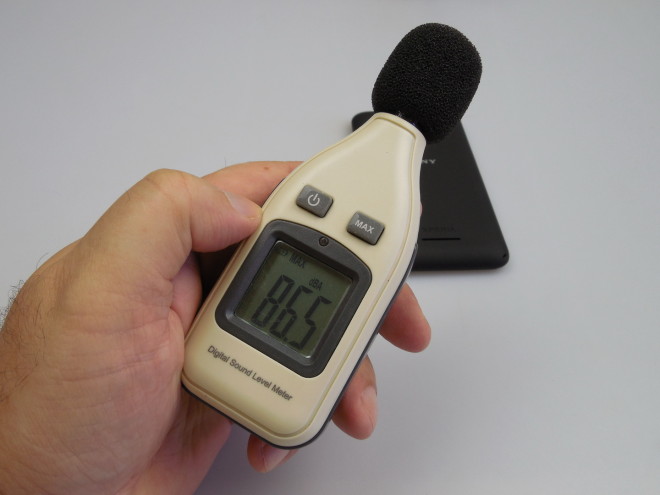 We tested the phone using a decibelmeter and achieved 86 dBA at the front and 86.5 dBA at the back, so there’s no muffling. The Xperia E4 gave us 80.9 dBA and the Xperia E4g is quite qood at 86 dBA, considering that HTC One M9 reaches 86.9 dBA and the iPhone 6 Plus 83.8 dBA. Drawing a line, I have to say that acoustics are simply great here, especially for a low end phone.

There’s also FM radio with RDS included, in case you’re wondering. The display is a 4.7 inch one with a 960 x 540 pixel resolution and an IPS LCD panel. The E4 was a 5 incher, so the diagonal has decreased, but the resolution was kept. A good piece of news is that Xperia E4g is less bad in sunlight compared to the predecessor, so contrast is better. 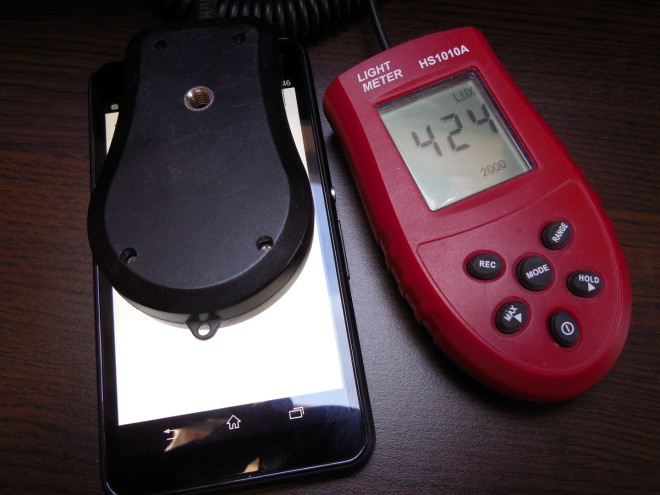 We’ve got RGB Stripe pixels here and the display offers a crisp and bright image, as well as realistic colors and wide view angles. We tested the brightness with a luxmeter and achieved 424 LUX, which is great, especially considering the Xperia E4 reaches 217 LUX, the OnePlus One 404 LUX and the HTC One M9 362 LUX. Overall, this is a great screen and you can tweak the experience via the Settings, with RGB sliders and Smart Back Light feature.

The back and front camera haven’t changed from the Xperia E4: a 5 MP shooter and 2 MP shooter, but the quality is a bit better. The back camera does 4X zoom, HDR and digital image stabilization. As usual with an Xperia, there are a ton of camera options, with augmented reality included, sound photo, manual mode with  ton of scenes and much more. The zoom is now more fluid than on the E4, that had a bit of problem there. 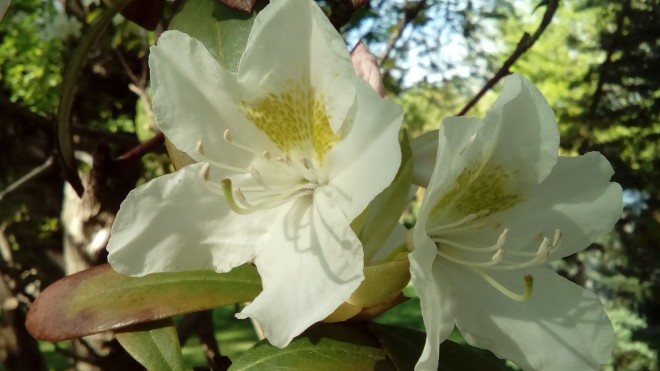 Then we get to the actual pictures (gallery here), with a landscape shot that has blurry trees and some details loss, but also realistic colors and OK lighting. An important aspect to mention here is that the Xperia E4 had about 15 or 20% of its shots blurry or moved, requiring a lot of patience to focus. That issue has been fixed on the E4g that has 10% blurred shots tops. We move on to the macro, that looked swell, with great details, good colors and blurred background to highlight the flower. It’s actually an excellent macro and you wouldn’t guess it comes from a 5 MP shooter.

The panorama is wide and reaches 4912 x 1080 pixels, it delivers great colors and it’s a bit curved. Details are great and there’s no problem with the sunlight in front of the camera. Shutter speed was tested as well, handling water drops from a fountain perfectly. General shutter speed has also improved and we’re sure about that, because we photographed the same rotating statue with both the E4 and E4g and the first one couldn’t handle movement. 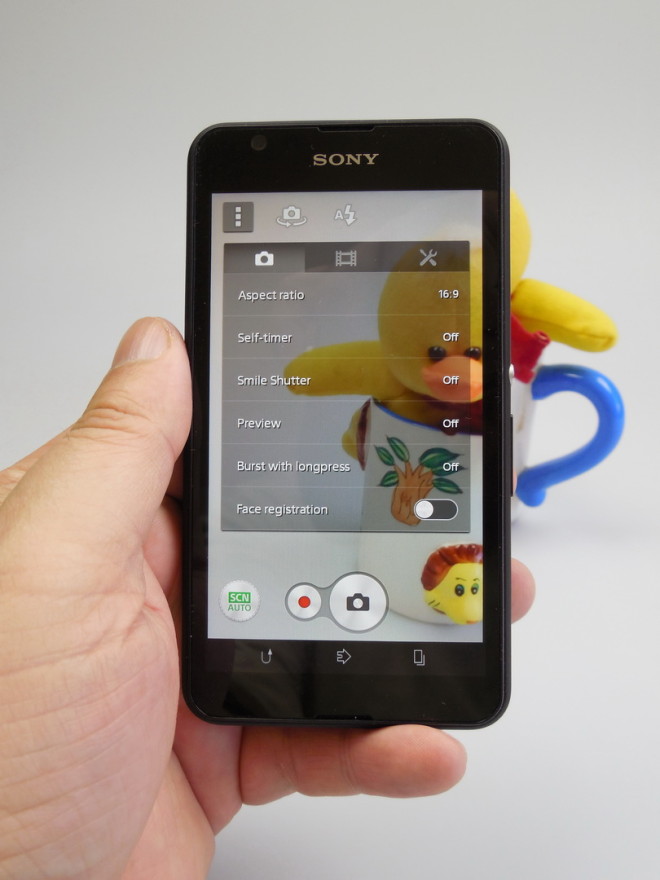 Back to the fountain shot, water texture and bubbles look great and so do the details. Finally, we took a shot of colourful flowers and in spite of a very sunny day, there was no burn. Instead we got nice colors, good clarity and good exposure. The video captured here is of the MP4 kind, with Full HD resolution, 30 FPS and 17 Mbps bitrate.

The stabilization is pretty poor, but colors and acoustics were reasonably good for a lower end phone. There’s a bit of motion blur when you watch what you captured, but the details were fine. We filmed the same fountain mentioned before and faced some focus loss, but at least we got good audio and nice lighting. Overall, the filming is marginally better than the E4 video capture.

However, if we also take pictures into account, the E4g constitutes a 20% bump up from the E4, strange as that may sound. Only the video capture could be better, if you really want to be picky. Connectivity-wise, there’s 4G LTE with up to 150 Mbps download speed, WiFi, NFC, GPS, Bluetooth 4.1 and during phone calls there’s good clarity and quality, as well as a loud experience and good signal. 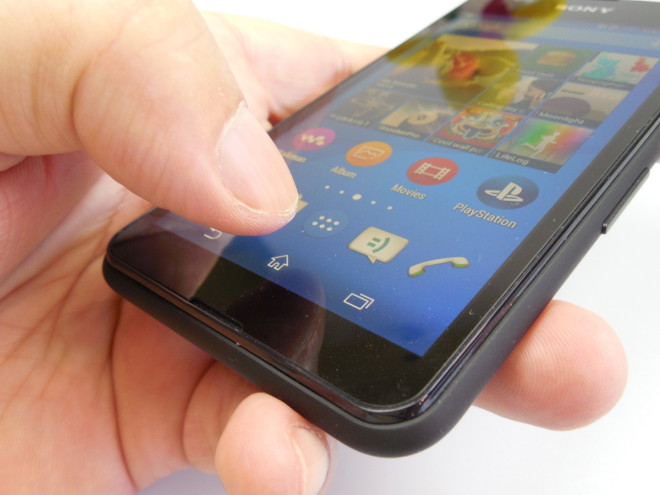 The web browser of choice here is Chrome, that’s pretty fast and this time the keyboard feels a bit cramped, on this smaller diagonal and low resolution. Sony Xperia E4g runs Android 4.4.4 and comes with virtual Android buttons, a custom Sony UI, that’s both flat and colourful, but less glossy than a few years ago. There are a few concepts that make the UI work: transparency, tiles (Walkman, Album and Video), unique widgets and that PlayStation vibe given by the backgrounds and icons.

Multitasking includes floating apps, that are minimized windows floating on the screen, able to be used at the same time. We liked the Settings area and Themes and among the preinstalled apps we mention Garmin, AVG, Office Suite, Track ID and SocialLife. At least, there’s not much bloatware. Now here’s the verdict!

We give this smartphone a 9.1 out of 10 for design, a 9.5 for hardware and a 9 for OS and UI. The final grade is 9.2 out of 10 and this one is a very solid Xperia E4 follow-up and Lumia low end killer. It’s great for young people, who don’t want to spend a lot on a smartphone, but they want great battery, good display and audio, plus a reasonably good camera. LTE and games are also a plus here.