Sony Xperia SL has been rumored a lot lately and it’s a pretty certain device for showcase at IFA 2012. Now it has appeared listed on Sony’s page as “Coming Soon”, pretty much a confirmation of its close launch. This 4.3 inch GSM device was published together with the full list of specs, that’s actually not that different from the one of the Xperia S. 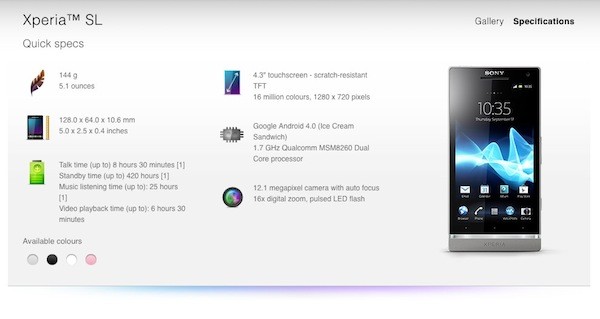 The SL is supposed to be a refresh to the Xperia S, only adding two more colour choices, silver and punk and a faster dual core 1.7 GHz processor. The CPU is of the Snapdragon S3 kind and we also get Android 4.0 ICS preinstalled. The original setup involved a 1.5 GHz CPU and Gingerbread. Other than that you get the same 12.1 megapixel camera, HD display, 1GB of RAM and 32GB of storage.

The handset measures 10.6mm in thickness, weighs 133 grams and has a transparent bar at the bottom with the symbols of the capacitive keys etched on it. The device also supports a quick charge feature, that juices it up for 1 hour of use after just 10 minutes of charging. It also has a special coating that protects it from getting dirty.