Sony MT27i Pepper has been in the news through leaks and pics even before the Xperia S was announced at CES 2012. The device just got real today, as Sony announced it under the name Xperia Sola. We’re dealing with a midrange phone here and we’ve heard the name Sola before, since it was trademarked by Sony last month. 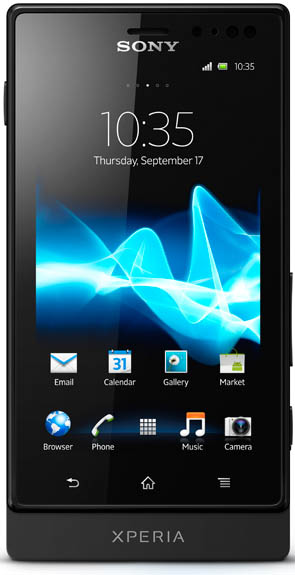 Sony Xperia Sola will be available in Black, white and red and it’ll hit the market in Q2 this year. Its specs include a 3.7 inch Reality Display with Mobile BRAVIA Engine technology and suppot for a 854 x 480 pixel resolution, a dual core ST Ericsson NovaThor U8500 processor at 1 GHz and 8GB of internal memory. Only 5GB will be user accessible and you must know that this Xperia series newcomer also offers a microSD card slot, a  5 megapixel camera with 720p video capture, aGPS, Bluetooth, WiFi, NFC and a 1320 mAh battery.

Android 2.3 is the OS of choice, with the option of upgrading to Android 4.0 coming soon enough. Other specs include audio technologies such as xLOUD and 3D surround and there’s also something fresh in the mix – “floating touch” navigation. This one is a method that allows you to do web browsing without touching the screen. You’ll simply hover the finger above the screen and it will act like a cursor. Meanwhile, Sony France rushed and tweeted that the Xperia Sola will be priced at $430 and it will come in week 17 of this year.