Steve Jobs is at it again, exchanging mails with people via Gmail. For the leader of a company that competes with Google, he sure is fond of their product… The latest email he sent claimed that we won’t be disappointed by what Apple showcases at WWDC 2010 on June 7th. 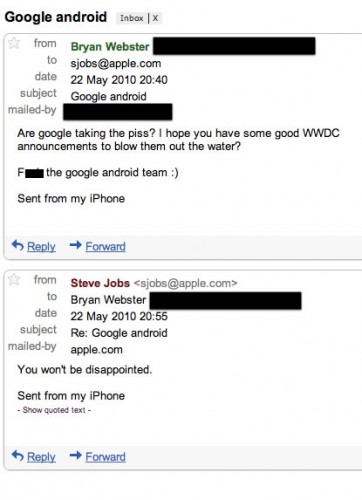 This statement was made in order to answer the folks wondering what Apple thinks about the recent Google I/O 2010 announcements. Does Steve Jobs fear Froyo and the popularity of Android handsets? He doesn’t seem to and in spite of the iPhone HD leaks over the past two months, he’s confident that the iPhone 4G will surprise us.

Meanwhile, Google didn’t hesitate to criticize Apple’s multitasking system that’s coming with iPhone OS 4.0, but we’ll have to wait and see before we can judge it.