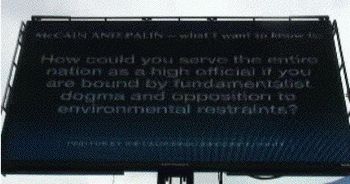 Have a question for Sarah Palin? Test “ASK” and your question to 69866 and you’ll see your query out in the open. Who wants to bet on the fact that the billboard will get “broken”, once uncomfortable questions start pouring in? And then, the Democrats will say the Republicans came and broke the billboard…

One crazy and technological election year, I tell you!