These days the camera modules integrated in high-end smartphones are not to be taken lightly. We’re still a long way from having a DSLR in our pocket but close to shooting some great stills using our smartphones. In the recently introduced Windows Phone 8 mobile OS zone, HTC and Nokia each bring powerful multimedia devices, each with it’s own advantages. 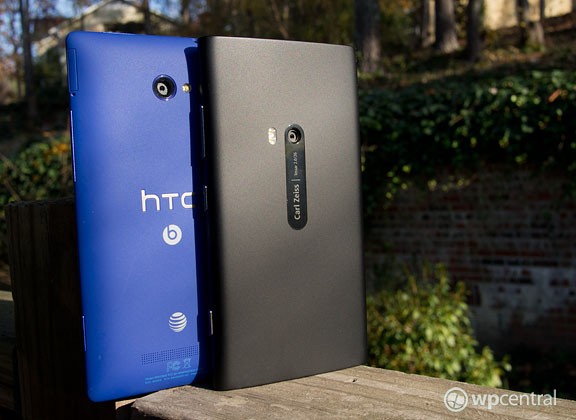 The Lumia 920 from Nokia integrates the PureView technology for it’s rear camera. While it’s not offering the 41 MP the Nokia 808 PureView features, it has some great optics and is the first to integrate optical stabilization into a smartphone camera module. This means great shots, especially in low light where blurry images are a problem mainly cause of the user not being able to keep the camera perfectly still.

HTC is also renowned for integrating some great camera modules in their smartphones and the HTC 8X is no exception. What has started with the inclusion of a HTC One X and the inclusion of an separate chip for processing images called HTC ImageChip, is taken one step further with the HTC 8X. HTC ImageChip offers great low-light performance, thanks to the F2.0 aperture lens and the BSI camera module. It also offers Color Lens Shading correction to balance and refine the color across your entire image and adds Extended Depth of Field to keep more of what’s in the viewfinder in sharp focus, no matter how close or far it is from the lens.

Given the large number of technologies included by both manufacturers in their camera phones, it is interesting to see a comparison test between the two. Wpcentral.com has taken the task of unveiling the best at capturing photos between the two. The Result: Nokia’s PureView and optical stabilization technology (right photos) gives the Lumia 920 the upper hand when it comes to capturing photos, especially in low-light. That does not mean that the HTC 8X (left photos) is anything but a great camera phone. It simply means that for camera enthusiasts the Lumia 920 might be the better choice. In the end both devices preformed admirably. Read the entire material at the source link.