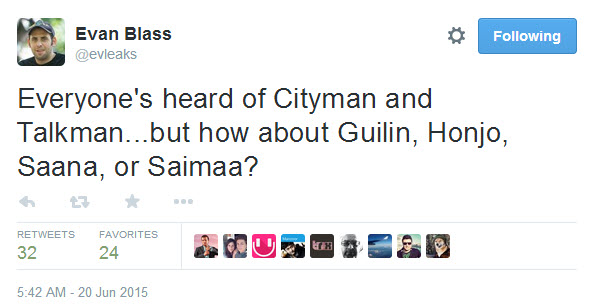 Famous leakster Evan Blass, aka @evleaks has leaked some new codenames for upcoming Windows 10 Mobile devices. He also mentioned the already rumored Cityman and Talkman models, believe to be the Lumia 940 and Lumia 940 XL, as well as newcomers like the Guilin, Honjo, Saana and Saimaa.

Evan must have a source inside Microsoft, since he has been very cozy with secrets related to this company, like the fact they made Nokia cancel 4 tablets after the Lumia 2520. Now we learn there codenames, without specs or pictures attached. At least two of them will debut next month, probably when Windows 10 Mobile is launched. Luckily we have some intel on the Lumia Cityman, that’s expected to come with a 5.7 inch Quad HD screen, 3 GB of RAM and an octa core Qualcomm Snapdragon processor, as well as 32 GB of storage.

There’s a 3000 mAh battery in the mix, as well as a microSD card slot and a 20 megapixel main shooter. A 5 MP front camera is also included, while the Microsoft Talkman is said to bring a 5.2 inch Quad HD screen, a hexa core Qualcomm CPU, 3 GB of RAM and 32 GB of storage. It will rely on a 3000 mAh battery, a microSD card slot and probably adopt the usual rectangular design.

There have been rumors about a Lumia phone with curved screen sides and one of the codenames above may just be it. I expect one of the models Guilin, Honjo, Saana and Saimaa to be the Lumia 1040 or 1030, the Lumia 940 or the 840. Perhaps we’ll also get a 1520 follow up.