Verizon’s Droid has been a hot topic lately and now it turns out that the official site of the handset has somehow leaked online, a weak before the phone’s unveiling. As expected, this device is the same with Motorola Sholes/Tao/Droid, a smartphone that’s been leaked on the web more than the Apple Tablet, if we might say so. 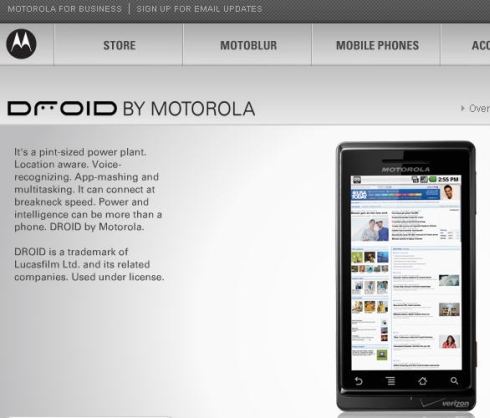 The same site that came up prematurely reveals the official specs of the Droid, good news for Android lovers. We remind you that the phone will go live on October 28 and it’ll come with Amazon MP3 store, Facebook, Gmail and Exchange integration. A 550 MHz CPU runs the show on this new Verizon device, plus Android 2.0 will be on board and a 3.7 inch touchscreen WVGA display, with a 480 x 854 pixel resolution (16:9 widescreen).