It is not unusual for a manufacturer to launch a device exclusively for one carrier, be it in the US, Europe or anywhere else for that matter. What is rather unusual is that HTC has launched their latest device, also a flagship model, on Verizon, with no word about when an International version might become available. 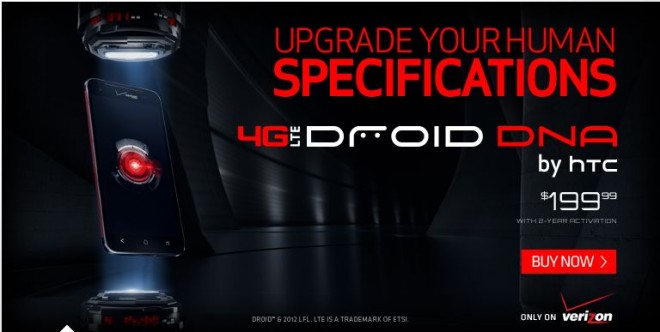 The HTC Droid DNA is a first on many chapters. It is the best device available on Verizon’s list and is also the most powerful smartphone is has ever had. It is also the most powerful HTC device yet and the first smartphone to feature a full HD – 1080p display at no less then 440 ppi at its 5-inch in size. The device packs quite a punch with its Snapdragon S4 Pro chipset, the same found in the Nexus 4 from LG and Google.

Beats Audio, HTC ImageChip for improved camera performance, a great, stunning design with red accents on a mate black surface, are only some of the features of the Droid DNA for Verizon. The device is running Android 4.1.1 Jelly Bean and one could only hope that Verizon’s track of updates does not apply to this handset and it will get the new version 4.2 soon enough. If you are changing carriers or are willing to get into a new two-year contract, the US carrier is offering the Droid DNA, now available for $199.