After some turnmoil and unexplainable delays, the Samsung Galaxy S III finally gets an actual release date on Verizon, for USA. Retailer HHGregg lists the product as coming on July 12th, with a price tag of $199.99, in either blue or white. This price applies to the 16GB version, in case you’re wondering. 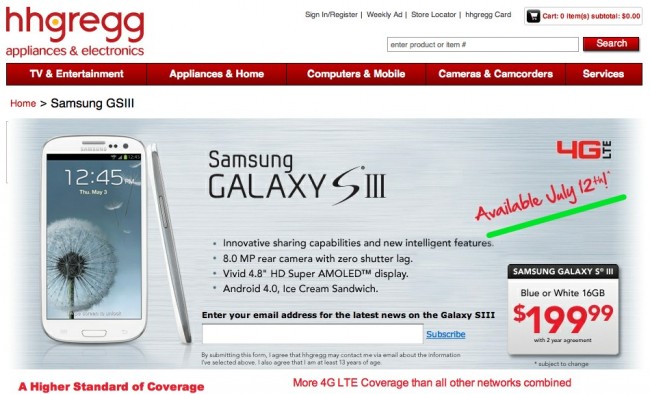 Verizon has already been accepting preorders for the device that have estimated shipping dates of July 9, 10 and recently even 11. So, it’s safe to say that in the middle of July 2012 you’ll be able to walk out of a store with a Verizon-bound Galaxy S III in your pocket. I have to remind you this is a quad core Exynos smartphone with a 4.8 inch HD touchscreen, but you probably know that already, since you’re bombarded with online ads, TV ads and emails about special offers for this phone.

Last I heard, Samsung estimated 10 million units sold of the Galaxy S III till the end of the summer. How much of them will the US market generate, especially with the hate going on between Samsung and Apple?