ViewSonic just unveiled 3 new handsets from the ViewPhone range, all of them dual SIM models with Android 4.0 Ice cream Sandwich as the OS. The particularly interesting unit is the ViewPhone 4s, that resembles the iPhone 4S not only in name, but also in resolution, being pretty close to the level of Retina Display. 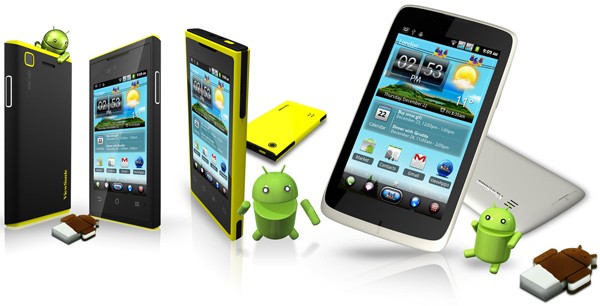 The ViewPhone 4S is pictured on the leftmost area of the image above and it comes with a 3.5 inch Super Clear IPS LCD display with a 960 x 640 pixel resolution, a 5 megapixel camera and a VGA front shooter. There’s also a 1GHz chip on board and next up, in the middle there’s the ViewPhone 4e, also with a 3.5 inch display, but with a lower resolution of 480 x 320 pixels, plus a 650 MHz processor and a 3 megapixel camera. There’s also an extra touch button compared to the 4s unit.

These may be budget phones, but ViewSonic also managed to keep them slim, at 10.3mm in thickness. The last of the bunch is the rightmost handset in the picture above, the 5 inch ViewPhone 5e. This one supports a mere 800 x 480 pixels in resolution and it’s a pretty beastly device, considering its size. Galaxy Note and Optimus Vu rival maybe?