There’s a screenshot creating buzz on the interwebs, since it shows an amazing “iPhone 4S White” in AT&T’s internal system. I say “amazing” because I haven’t seen such blatant proof of the existence of the iPhone 4S till now. 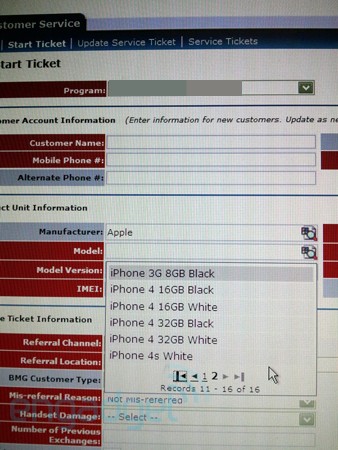 Not so long ago, Vodafone UK posted some info about accessories compatible with the iPhone 5, so that was a cute leak, but how about this one? Are the rumors that have been circulating for a while true? I mean the ones that say we’ll have two new iPhones, the 4S and 5 model coming no later than next month.

Well, one thing is for sure: Vodafone will sell the iPhone 5 and AT&T will sell the iPhone 4S, according to this leak. And also, both will be available in white straight from launch, so there’s no waiting time for the more “pure” version this time. Differences between the 4S and fifth gen Apple handset?  Some say that the 4S will be a mere upgrade to the iPhone 4, while keeping the design intact. It’s supposed to be a cheaper model with 8GB of storage… Others say it’s a LTE unit, but I guess we’ll have to wait and see, most likely in the following two weeks.