Sprint managed to leak its WiMAX roadmap for 2009 thanks to its Sales Portal and now we have the screenshot below to have a look at and be puzzled by the choice of cities when it comes to 4G rollout. 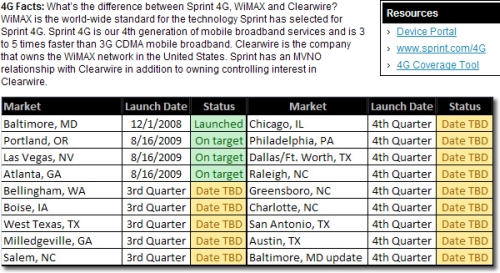 We knew that WiMAX was coming to Chicago, Charlotte, Dallas and Philadelphia, but the rest are novelty to us all. I bet that the people in Baltimore will be excited to find out that their coverage will be upgraded from Q4, while the people of Salem and Milledgeville will probably throw a 4G party at some point.

Why launch WiMAX in areas with only a dozen thousand people? God only knows and Sprint… but major rollouts have to start somewhere, right? Just don’t let the big metropolises feel neglected, or they’ll switch to Verizon’s LTE Solution. The new connectivity should also reach New York, San Francisco and Washington D.C. in 2010.