While we’ve yet to see a Windows 7 phone (although there’s a Windows XP handset out there), the HTC HD2 seems to handle the latest desktop OS from Microsoft perfectly, at least via the Remote Desktop app. This is a remote control software for the Win 7 OS, allowing you to mess with your PC, while on the move. 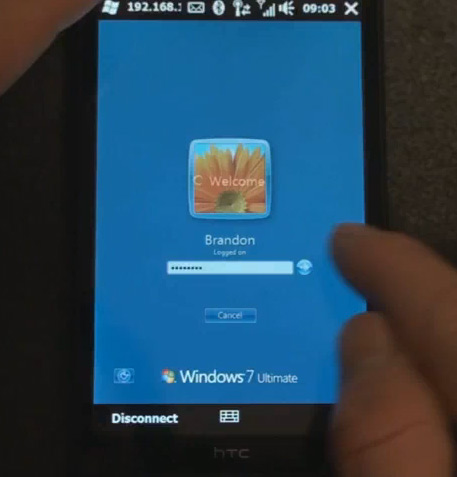 Remote Desktop has been out there for years now, but the novelty of this piece of software is the fact that it runs on HTC HD2, the latest WM 6.5 handset. HD2 runs a new version of Remote Desktop, that uses the multitouch features of the smartphone, allowing an intuitive navigation experience, plus zoom in/out via pinching.

Windows 7 looks decent on the HTC smartphone screen and, as you can see, Remote Desktop allows the Pocketnow editor to access My Computer and the desktop version of Word in Windows 7. The software relies on a selector shaped like a square, allowing the user to move all over the desktop screen, shown in a miniature version on HTC HD2.

Here’s the video of the cool app in action: