Isn’t it ironic? I mean, to fool around with the iPhone and its apps and suddenly spot a Windows Marketplace for Mobile ad, like Twitter user habasch did? The proof is available below, as a screenshot. 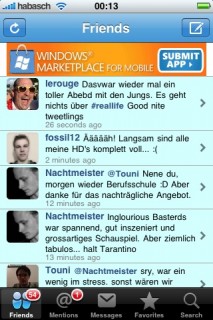 This means that Microsoft’s marketing machine has finally been put to work and we’ll see all means of promotion soon advertising Windows Mobile MarketPlace. Turns out they really DO give a damn about Windows Mobile (wasn’t it called Windows Phone now?) and maybe they’ll postpone the plans for a Windows handset, after Zune HD sells well enough.

The only question is: “will developers be as keen on working with MS as they are when it comes to Apple or Google?”