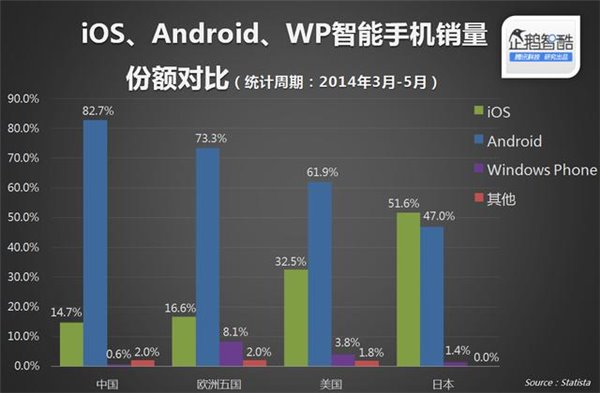 We already knew that globally, Microsoft’s Windows has a share of 14%, with all the desktops, tablets and phones included. However, Windows Phone is doing much worse in comparison with other mobile OSes and last I heard, it had only 4% of the whole pie. In China they’re doing even worse, with 0.6% apparently.

In other markets we see iOS and Android battling it out, like in Japan for example, where iOS is over 50% and Android is around 47%. In China Android is at a huge 82.7% of the market, while Apple is at 14.7%. Windows Phone can’t even begin to compete with the top two, but at least in Europe the performance is better, with 8.1% of the market. As you can see, not even big giant Apple with Tim Cook’s frequent visits to China and Japan couldn’t turn around their market share.

I’m guessing it all relies on the nationalistic tendencies of locals. Many Android tablets are made in China and Japanese people love their Sony, NEC, Fujitsu, Sharp and Panasonic devices, all of them with Android on board. Windows Phone also stands for US products, but recently many smaller Asian makers have taken over the OS, so I expect a bump in market share in Asia soon enough.