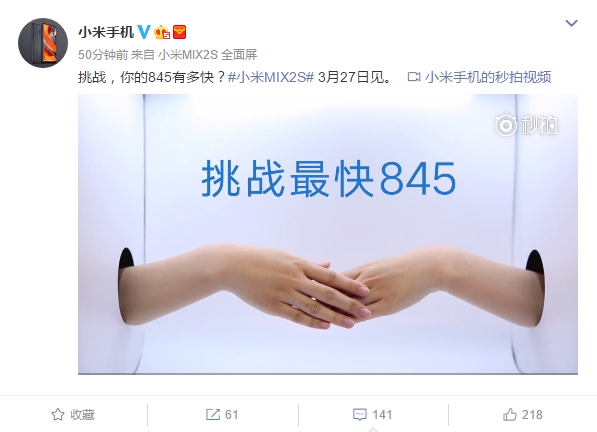 Xiaomi confirmed last last month that they won’t be bringing the Xiaomi Mi MIX 2S to MWC 2018 as rumored, but instead it’ll come on March 27th in a separate event. It may well steal the thunder of the Huawei P20, being launched at that time. Now we see new teasers and promises related to the device’s powerful CPU.

As you’ve probably heard already, the Xiaomi Mi MIX 2S is going to be the first Xiaomi phone to sport a Qualcomm Snapdragon 845 processor. Interestingly, the company promises extra power compared to other Snapdragon 845 phones out there. Well, aside from the Xperia XZ2 and the Samsung Galaxy S9 there aren’t that many, to be honest. Reports surfaced last fall that Xiaomi and Qualcomm were becoming buddies and working on improving the Snapdragon 845 chipset.

They may have actually partnered on this project. Sources claim that compared to the Galaxy S9, Galaxy S9+, Xperia XZ2, Xperia XZ2 Compact and ASUS ZenFone 5Z, the Mi MIX 2S offers an extra kick in performance. An average benchmarking score of 273.341 has been reported in AnTuTu. Previous leaks revealed that the Snapdragon 845 on the new Mi MIX will come together with 8 GB of RAM, 256 GB of storage.

It should also feature a 6.01 inch display with an embedded fingerprint scanner. I wouldn’t be surprised if a dual back camera also makes the cut.  By the way, I’m not very sure that the poster above is a good idea, since it seems inspired by Nokia’s famous hands touching.