Xiaomi is a Chinese company that became famous in the international media after launching its very own Android smartphone in Fall 2011. That company is the one behind MIUI, a custom firmware for mobile handsets, based on Android. Now they’re ready for a repeat success, announcing the Xiaomi Phone 2, with a quad core processor. 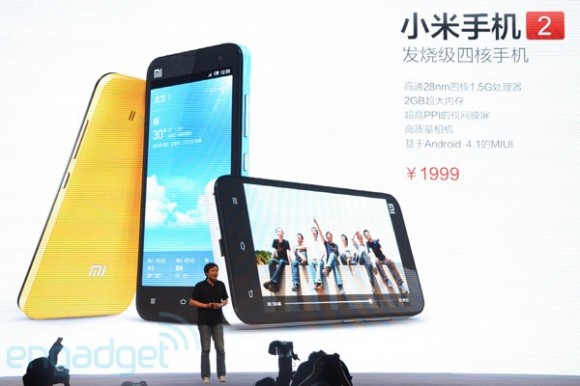 Xiaomi Phone 2 was made official during an event in Beijing this week and it’s supposed to pack a 4.3 inch 720p IPS display and a quad core Qualcomm processor. The device is surprisingly enough powered by Qualcomm’s hottest and latest chip, the APQ8064, a quad core 28 nm SoC solution at 1.5 GHz. The company showed off benchmarks using AnTuTu and Quadrant and scored amazing results: 14085 and 7787 respectively. We also get 2GB of RAM on this monster smartphone and 16GB of storage.

The 4.3 inch display will be made by Sharp, with a pixel density of 342 PPI, beating the iPhone 4S, HTC One X and Samsung Galaxy S III. An 8 megapixel camera with backside illuminated sensor sits at the back and a two megapixel shooter is present at the front. The main camera does 1080p 30 fps video recording or 720p at an impressive 90 FPS. The standard version of the phone uses a 2,000 mAh battery, while there’s also a superior one, with a 3,000 mAh battery option.

The device with the custom software MIUI, obviously, this time on top of Android 4.1 Jelly Bean. The price tag for this model is an incredible $314 without contract. Lower prices may be applied by carriers.