Xiaomi Phone 2 has got to be the most appealing device to come from China ever since a Meizu phone caught our eye. This device, also known as the MI-Two now gets a launch date of October 30th, when it will be coming in 16GB and 32GB flavors. It’s powered by the already famous quad core Snapdragon S4 Pro and costs just $320, in the 16 GB version, a crazy price for such performance. 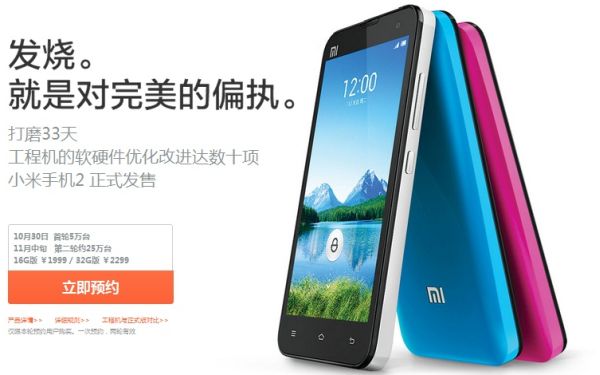 The price is even funnier when you consider it costs the same as an iPad Mini. On October 30th, the device maker will release the first 50k units, followed by an extra 250k in mid November. People who reside in China can register online to get one for a quota, so I suppose we may see these things on eBay selling well soon enough. The phone was actually the first one with this CPU on board, since it was announced back in July. The handset comes with Android 4.1 Jelly Bean preinstalled and MIUI OS on top of it, as well as 2 GB of RAM.

An 8 megapixel camera and 2000 mAh battery are also on board, as well as a 4.3 inch IPS LCD screen with HD resolution. The smartphone weighs 145 grams and measures 10.2 mm in thickness. This model is on par with the likes of LG Optimus G, Oppo Find 5 and HTC J Butterfly, some of them ready to cost double the amount you pay for the Xiaomi device. So, when will we see an international launch?