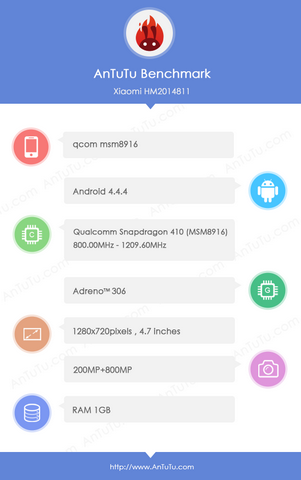 Xiaomi Redmi 2S has reached the AnTuTu benchmark, as a brand new midrange model, that was already certified by TENAA. We previously knew that Xiaomi moved the LED flash and the speaker grille on the back of the phone and also redesigned the capacitive keys.

Xiaomi Redmi 2S integrates a 4.7 inch display with a 720p resolution and inside there’s a quad core Snapdragon 410 1.2 GHz CPU. The smartphone supports 4G LTE connectivity and will integrate an Adreno 306 GPU, following the Adreno 305 of the Redmi 1S. 1 GB of RAM is also on board, as well as an 8 megapixel camera at the back.