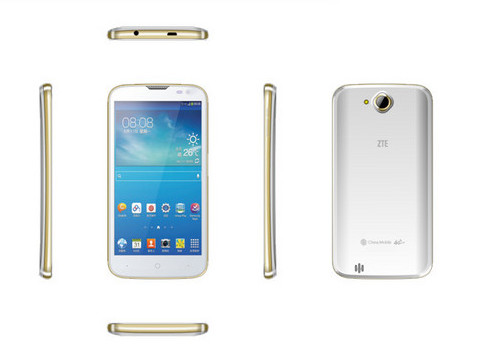 ZTE has announced a new handset, the Q805T model, that stands out through an unusual CPU choice. This model uses a Marvell chipset and in the process it also has 4G LTE connectivity. Seeing how Qualcomm are being pushed out of China we should get used to such CPU choices.

This smartphone runs Android 4.3 Jelly Bean and it relies on a quad core Marvell PXA1920 1.2 GHz processor. Upfront we find a 5.5 inch IPS LCD HD display and at the back there’s a 5 megapixel shooter, while upfront rests a 0.3 MP cam for selfies. This unit has WiFi and Bluetooth, 1 GB of RAM, 4 GB of storage and I’m pretty sure there’s a microSD card slot in the mix as well.

The battery inside is a 2500 mAh unit and ZTE Q805T comes only in white. China Mobile will be selling the product, that has some nicely rounded edges. The UI seems to have been borrowed straight out of the TouchWiz playbook, which seems rather bizarre to me. Is this UI cloned from Samsung’s interface?