We’ve been stunned by ZTE’s strong presence at MWC 2013, with a very cool phablet and smartphone and even a device with a Snapdragon 800 CPU. Now there’s a fresh leak of a new device, the ZTE Grand X Quad, pictured below in what looks like a press render. 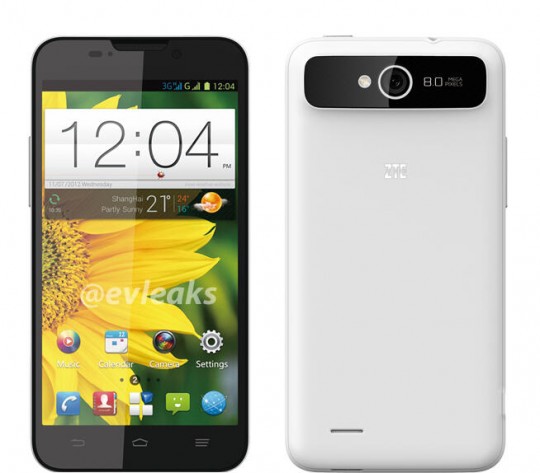 The pic shows both a front and rear view of the handset and you should know that this model is also known as the ZTE V987, courtesy of the TENAA database. It will be coming with a 5 inch capacitive display with a 1280 x 720 pixel resolution and other specs include a quad core 1.2 GHz processor and 1 GB of RAM.

It runs Android 4.1.2 Jelly Bean and at the back we’ve got an 8 megapixel camera, as shown in the picture. WiFi, Bluetooth and microSD are all available here and previous leaks regarding the V987 also said it has a removable 2500 mAh battery. Seeing how the specs are pretty decent, the price should be around $400 or so, if you allow me to estimate.