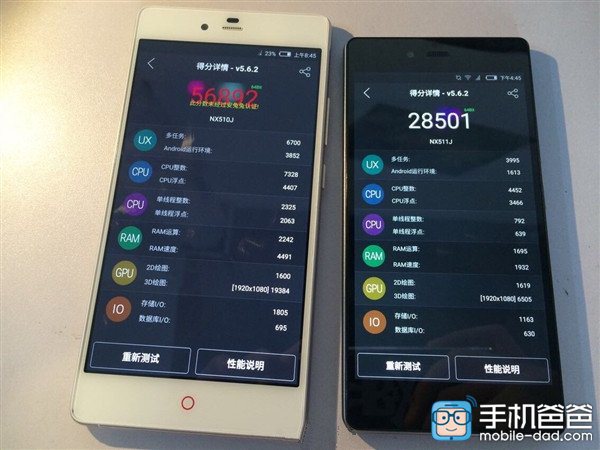 The ZTE Nubia Z9 Max and ZTE Nubia Z9 Mini were announced yesterday and already we’ve spotted their AnTuTu results. The bigger model is performing pretty well, while the smaller one is a bit of a letdown.

ZTE Nubia Z9 Max, a Full HD 5.5 inch phablet with a Snapdragon 810 CPU gets a score of 56892 points in AnTuTu, which is impressive only among Chinese phone makers. If you  compare it to the 68 or 69k of the Galaxy S6, it’s not that impressive anymore. Meanwhile, the ZTE Nubia Z9 Mini is a letdown, with its 28k score, that can easily be beaten by several $200 phones in China.

Both these models go on sale in China in April, packing Lollipop and a custom ZTE UI. The interesting thing is that the version of the ZTE Nubia Z9 Mini tested here in AnTuTu has a MediaTek MT6752 processor inside and not a Snapdragon 615 octa core CPU, as announced yesterday.