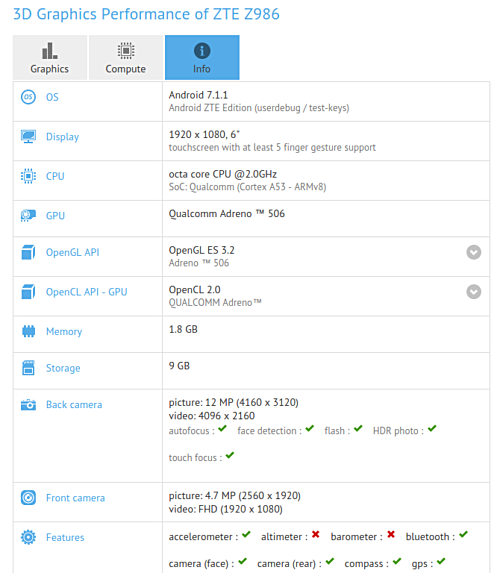 There’s a fresh leak in town, one that has to do with a ZTE phone, but don’t get your hopes up, as it’s not a Nubia. Instead, it’s the ZTE Z986, a 6 inch phablet with Android 7.1.1, that just popped up in GFXBench. Let’s see what the handset has to offer.

It relies on an octa core Snapdragon processor clocked at 2 GHz and also has a 6 inch Full HD screen. The listed RAM quantity is 2 GB RAM and storage is 16 GB. The camera mentioned here is a 12 MP or 13 MP shooter, plus there’s a 5 MP selfie camera. A microSD card slot should also make the cut and this model sounds just like a typical midrange phablet.

The fact it has the latest Android is certainly good and we could end up with a model similar to the ZTE Z986DL and Z986U, that leaked via Bluetooth SIG in January. Such big devices are meant for watching movies on the go and they also have decent midrange cameras. Expect a sub $300 price.